Roger Moore’s first turn as 007 has him encountering Dr. Kananga (Yaphet Kotto), whose tarot card reader Solitaire (Jane Seymour, in her first movie role) can predict the future perfectly, until she loses her virginity!

Kananga plans to distribute free heroin throughout the U.S. from his fields in San Monique. Solitaire predicts that she and Bond will become lovers. The prediction comes true, Bond is captured, Solitaire loses her powers of foresight and Kananga’s one-armed goon Tee-Hee (Julius W. Harris) attempts to feed Bond to crocodiles.

Bond escapes, rescues Solitaire before voodoo Baron Samedi (Geoffrey Holder) can kill her and Felix Leiter (David Hedison, in his first turn as the CIA Agent) initiates the destruction of the poppy fields. But Bond and Solitaire are captured again and only 007’s mini-circular saw watch with the built-in high-powered magnet can cut the ropes and attract a compressed air bullet before the two are lowered into a pool of sharks.

While Solitaire and Bond recuperate on a train ride, Tee-Hee comes into their room. In the ensuing fight, 007 snips the wires on Tee-Hee’s mechanical arm, clamps it to the window frame and flips Tee-Hee off of the train.

As Solitaire and Bond bed down, Baron Samedi is seen sitting on the locomotive’s cow catcher, laughing his way into the night.

Paul and Linda McCartney penned the unforgettable title song, which was performed by “Wings”. 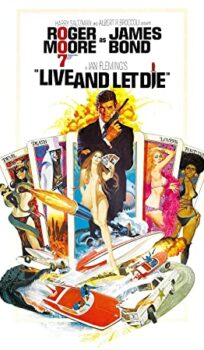