Driven by her insatiable hunger for big ratings, Kate (Blanche Baker) advises Dexter (Terrence Carson) on how she feels a proper news reporter needs to look, act, and speak, but in the process, he becomes less and less himself in every way and he is forced to focus on getting juicy exposés and exclusives instead of meaningful news. He also forgets where he came from, alienating his family, friends, and those in his community, sometimes through his exposés, and one exposé results in his best friend Baker (Nathaniel Hall) getting hospitalized. Kate also feels that his impending marriage to his fiancée Toynelle (Lisa Arrindell) will disrupt her goal for the Channel 4 evening news to be an undisputed #1 in its time slot, so she decides to engineer a breakup between them by manipulating the airheaded meteorologist Missy (Julia Campbell) into seducing and sleeping with Dexter, promising to make her a reporter if she succeeds. Dexter succumbs to Missy’s charms and has sex with her back at the apartment he shares with Toynelle, and Toynelle quickly discovers this and breaks off their engagement. Through it all, Dexter begins to wonder if being more successful means selling out and becoming “whiter”, and each time he watches his reports, he thinks he is slowly transforming into a white man.

One day, Clifford Worthy (Bernie McInerney) – Channel 4’s evening news anchorman who is Dexter’s idol and believes in telling actual news (like Dexter first sought to do) but has become jaded over having to kowtow regularly to Kate’s ambition – loses his cool on the air after another one of Dexter’s exclusives, taking a gun he brought on set that is in relation to the story and shooting out one of the cameras. Kate later informs Dexter that she has selected him to be a co-anchor to replace Clifford, but his excitement dwindles when she tells him that Missy will be the other co-anchor. Kate then adds that to kick off this new direction (and to exploit them for another big ratings achievement), they will get married live on the air. Dexter is none too thrilled with this idea, but she manages to talk him into it by claiming that he won’t get another opportunity to become an anchorman for a long time if he doesn’t play ball here, and he can just divorce Missy during the next ratings sweep and she’ll do a story on that. Dexter visits Toynelle and tells her about how he is going to become Channel 4’s newest anchorman, but only if he weds Missy, and that Kate has told him that he can just divorce her afterward. Angered, Toynelle tells him that he has been letting Kate run his life and let her turn him into a weak punk. He says that this is all just for the ratings, but she replies that that doesn’t make it right. She then accuses him of not caring about her and says that he can take his job and all of the things he has acquired with it and stick them where the sun doesn’t shine, and he leaves her home.

As the wedding is minutes away from going live, we see that Clifford is seated among the actors making up the audience and wedding party, and Toynelle, Baker, and Dexter’s sister Nadine (Loretta Devine) show up and sit beside Clifford. Dexter watches a pre-taped interview of himself talking about the impending nuptials on a nearby monitor, and to his eyes only, it soon switches over to the now-fully-transformed white version of himself, who tells him that they are now what he always wanted to be. Dexter screams for him to shut up and tells everyone that this guy is not who he really is and the only woman he wants is Toynelle, and Baker and Clifford both come up to him to try to calm him down. Kate then appears, wanting to know what is going on, and Dexter regains his composure enough to tell Kate that he wants Baker to be his best man instead of the actor they hired. She allows it, but Baker soon tells him that, while he has his back, he doesn’t understand why he is marrying Missy. Come time for the vows, Dexter finally comes to his senses and says, “I don’t”, and as his white self rebukes him over the monitor for this, Dexter finally erases this illusion by destroying the monitor.

As the set devolves into chaos, Missy blames Dexter for wrecking her career, prompting Toynelle to start moving in her direction to defend him. Kate then appears and makes a racist remark towards Dexter along with threatening to tear him apart, so Toynelle decides to go after her as well, with Nadine blocking off the escape route. The production crew tells the announcer to wrap up the segment, and as he attempts to do so, he claims that Dexter has gone mad. Dexter grabs his microphone and shoves him away, then tells the viewers that he is of sound mind and that Toynelle is his real fiancée, and this manufactured wedding is just a typical example of the hype that has replaced meaningful news on this channel. He also publicly apologizes to all of the people he has hurt through his reports, blaming it all on his own runaway ambition, and he adds that, while he can’t change what has already happened, he is back to his old self again, no matter what his fate is on Channel 4. Just then, Toynelle snatches both Kate and Missy and knocks their heads together, sending Kate into the wedding cake unconscious and Missy into a pillar and leaving her sobbing on the floor. Dexter then goes up to Toynelle and apologizes to her and says he has always loved her, then they kiss while everyone applauds.

Baker – who has been serving as the film’s narrator – says that Kate got what she wanted; the wedding show was the highest-rated news show in Atlanta and is still the most talked-about show to this day (though it can be safely assumed that her boss fired her, as well as Missy, since we never see either of them again). He then shows that Dexter did become a co-anchor for the evening news after all, but with Clifford as the other co-anchor. 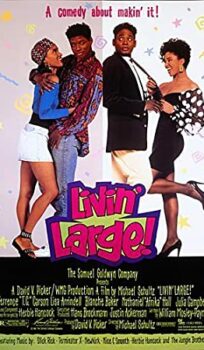