Eddy the card shark and his three mates Bacon, Soap and Tom, put together £100,000 for a high stakes poker game with Harry the Hatchet!  Harry cheats and Eddy winds up owing £500,000!  Harry’s real intention is to take the bar of Eddy’s father, played by STING!  Eddy and his mates overhear the gang next door, that is run by Dog, talking about robbing a gang of marijuana growers.  Planning to rob Dog’s gang, they buy two recently stolen shotguns from Nick the Greek, that were sold to him by Gary and Dean.  Nick also makes a deal to sell the stolen marijuana to Rory Breaker.  Unknown to them, the shotguns are worth a small fortune and were supposed to go to Harry the Hatchet!

The marijuana was grown by a gang that works for Rory Breaker!  Gary and Dean are quite anxious to recover the guns because Harry is not called the Hatchet for nothing.  The gang next door rips off the marijuana gang, and is then ripped off by Eddy’s gang. Dog discovers Eddy’s gang lives next door, and steals the drugs and the guns.  Rory Breaker and his gang then visit Dog’s gang and have a big shootout killing practically everyone except Dog.  Harry’s bill collector, Big Chris, beats up Dog and gets the money and the shotguns. Big Chris takes the guns and money to Harry.  Gary and Dean get in an accidental shootout with Harry and everyone dies.  Eddy’s gang shows up at Harry’s and take the cash and the guns.  Dog tries to extort Big Chris but Big Chris beats him to death with a car door. Big Chris then takes back the money but lets Eddy’s gang keep the guns, because they did pay for them.

Eddy and his mates then decide the thing to do is get rid of the guns lest they be linked to them.  They send Tom to throw the guns in the Thames.  Big Chris then shows up and gives them a gun catalog showing that the guns are priceless.  Eddy, Bacon and Soap then frantically call Tom……..Tom is last seen deciding whether to answer his phone or drop the priceless guns into the Thames. 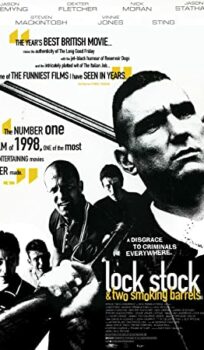