In the future, a maximum security prison is orbiting Earth with 500 violent criminals in stasis. The US president’s daughter Emilie (Maggie Grace) goes there to investigate whether the prisoners are being humanely treated, as there have been reports that the stasis causes psychosis and early dementia. One prisoner being interviewed by her gets hold of a gun, kills several security staff members, releases all the other prisoners and takes a bunch of hostages, including Emilie.

A CIA agent named Snow (Guy Pearce) is about to be sent there for espionage he didn’t commit, but is offered the chance to go in alone to save Emilie, as sending a large task force of soldiers would only provoke the prisoners. The decision makers think Snow should be able to move around and hide more easily if alone and he has the best shot at getting Emilie out alive, after which a large assault can be made. Snow has his own reason for agreeing to such a risky mission, as the only man who can prove his innocence, Mace, is imprisoned there.

Somewhat pampered Emilie hates the sarcastic, cynical Snow at first sight but he rescues her and they find Mace. The stasis has left Mace demented and he is only able to babble a few seemingly unrelated words before he is killed.

The prisoners fail to maintain the station’s orbit; it crashes into the International Space Station and begins to fall back into Earth’s atmosphere. Snow is knocked out and Emilie is recaptured. She is able to talk to her father briefly and begs him to go ahead and destroy the station. Snow arrives in time to save her again and they escape via spacesuits & parachutes (really).

Back on Earth, Emilie puts together the random words that Mace had said, and finds the briefcase crucial to Snow’s defense. Snow is exonerated, and his supervisor is revealed to be guilty party.

Emilie ditches her Secret Service detail one night and finds Snow so he can make good on an ice cream cone he had jokingly promised her. 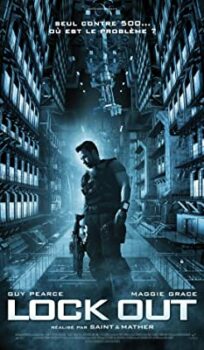