Jack Burns (Kirk Douglas) is a relic of the past, a cowboy on horseback wandering through a world that now has telephones and automobiles. His buddy is in jail, so Jack intentionally gets arrested to break his friend out.  Jack plans for them to cross the border into Mexico to escape the law. The friend does not want a life on the run, and refuses to go, so Jack breaks out alone.

The sheriff (Walter Matthau) goes after him, tracking him with helicopters.  Jack reaches a dense woodland near the border.  The pursuers assume Jack will reach Mexico and be free, since they can not track him through the thick forest.  However, as Jack is crossing a highway near the border, he and his horse are hit by a truck, killing the horse and sending Jack to the hospital, fate unknown. 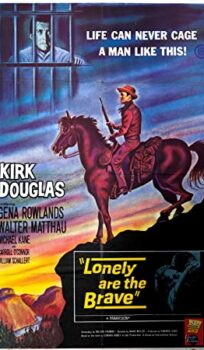