It is to be noted that the term LONGTIME COMPANION was the only acceptable way in which written media would refer to the surviving life partner of an AIDS victim, back in the 80s. Also, Norman René, the Director of this film, died himself of AIDS complications in 1996.

The film chronicles the lives of a close group of gay male friends as the comeuppance of the AIDS epidemic impacts their lives throughout the decade of the 80s. The majority of them die of AIDS-related complications; in this order:

By 1989, only Willy (Campbell Scott), Fuzzy (Stephen Caffrey) and Lisa (Mary-Louise Parker) were left, presumably unscathed. They discuss an upcoming demonstration from the ACT UP Coalition, reminisce about the earlier days when no one had to worry about being hit and potentially killed by this horrible disease, and hope for an eventual cure. Suddenly, a horde of all their friends lost to AIDS appear on the same beach they are, leading to an emotional encounter and big celebration; Willy and John share a tender embrace…

… but it’s just in their minds. Willy reiterates “I just want to be there” (for when the cure is announced), and the movie ends as the three friends walk together into the distance. 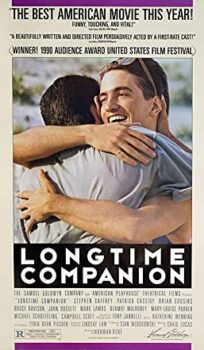