This is based on a true story, and a lot of things happened after what was appointed as the end of the film.  Also, this is not entirely a pooper, since the plot’s details do not allow space for actual surprises, but resolutions on the main characters’ particular situations.

Augusto (Nick Nolte) and Michaela Odone (Susan Sarandon) are a couple whose young son Lorenzo (played by several young actors through an extensive timeline), at age 5, developed symptoms of a strange, barely-known-about disease called Adrenoleukodystrophy.  They learned that its progress was unstoppable and Lorenzo was doomed to die within the next two years.

Reluctant to the idea of losing their only beloved child, they spend the next years researching and trying to find some sort of cure on their own.  In the meantime, Lorenzo eventually got confined to a bed, unable to speak or move, having to be fed by a tube through his nose, guarded by nurses 24/7, and under a constant risk of choking for swallowing his own saliva.

However, a light at the end of the painful tunnel is found.  Eventually, Augusto discovers the source of Lorenzo’s problem, and develops a therapy based on a mix of two fatty acids.  He tries it on Lorenzo, and Lorenzo’s brain degradation stops.

By the end of the movie, Augusto and Michaela had continued researching and looking for funds to promote the transplant of healthy myelin cells, which could help get Lorenzo back to normal.  Up to this point, Lorenzo was already able to swallow his saliva by himself, say “no” by rolling his eyes, and “yes” by slightly wiggling a pinkie, as part of his recovery.

The movie ends with some info about Augusto receiving an honorific doctorate in Medicine for all his efforts; Lorenzo being 14 years old and able to express himself in some simple ways; and Augusto and Michaela’s ongoing efforts to gather funds for THE MYELIN PROJECT.

UPDATE:
Michaela Odone, Lorenzo’s mother, battled cancer for a few years and died in 2000.  Lorenzo Odone died in 2008, at the age of 30 (TWENTY YEARS OVER THE TIME THE DOCTORS HAD PREDICTED FOR HIM), of aspiration pneumonia, with his father Augusto and their old-time friend Omouri by his side.  He never regained his ability to speak or fully move, or his vision, but it is obvious the treatment his father had invented had some positive effect on his health and his life. 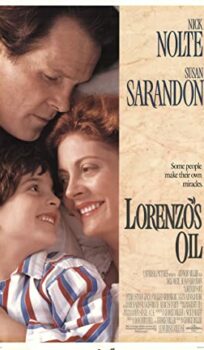