A small group of westerners is “kidnapped” from China to Shangri-La, a magical land hidden deep in the Himalayas, where people live in peace with each other and in harmony with nature. They are taken because one of their group, English diplomat Robert Conway (Ronald Colman) has been identified as an ideal candidate to become a future leader in Shangri-La. While everyone is initially outraged, most of the group comes to love and appreciate the land, leading them to want to stay. Conway’s brother George (John Howard), however, is convinced by a young girl, Maria (Margo), that the Hi Lama (Sam Jaffe) is overly controlling, and that a better life could be had back in Western civilization. Maria and George eventually persuade Robert to attempt to return to England.

As the trio crosses the mountain peaks that enclose Shangri-La, Maria quickly reverts to her true chronological age, becomes an old crone and dies. The Conway brothers are horrified, but continue on. On one pass, George falls into a chasm to his death. Robert Conway eventually struggles back to a small Asian village and collapses. He awakens in a stupor, being transported back to London by the British officials who have been searching for him.

When Conway recovers his senses, he breaks free, and attempts to get back to Shangri-La. His quest achieves mythic proportions as the legend of the single-handed attempts of the “Mad European” to scale the mountain is passed through the newswire. Eventually, he passes beyond the last human outpost, and no more word of him is heard.

In the film’s final scene, Conway is shown passing over the final mountain, and joyously looking down into the valley of Shangei-La.

Thanks Curt, the “Grand Poop-bah”
(Curt’s personal note: I had always seen *some* parallels between this story and the ABC TV show “Lost,” But in this new TV season, the similarities are even more striking. I wouldn’t be surprised if the show has a very similar conclusion…) 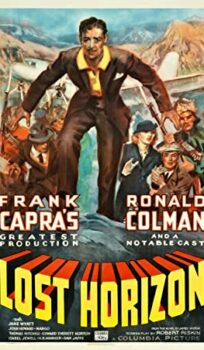