Sarah (Laura Linney) gets nowhere with Karl (Rodrigo Santoro) because she is more concerned with being at her mentally challenged brother’s beck and call. Mark (Andrew Lincoln) finally tells Juliet (Keira Knightley) how he feels about her, and she, of course, stays with her husband (and his best friend), but this allows Mark to move on. Billy’s (Bill Nighy’s) song reaches number one (meaning he will strip naked on national television, as promised), and he goes off to party with celebrities, but in the end he chooses to be with his manager for the holidays (showing the platonic love between friends). Karen (Emma Thompson) confronts Harry (Alan Rickman) about the necklace he buys for his secretary, but in the final airport scene we see they are still together, although things are still tense. Daniel (Liam Neeson) drives Sam to the airport so that he can see Joanna (Olivia Olson) before she flies off, he runs to her gate to see her, and she gives him a kiss. Later we see Sam waiting for her return, and Daniel is there with Carol (Claudia Schiffer), the woman he met at Sam’s performance. The Prime Minister (Hugh Grant) finally kisses Natalie (Martine McCutcheon), and in the last scene we see her greeting him passionately at the airport. Colin (Kris Marshall) finds love- or at least a beautiful girlfriend- in America, and brings her (and her sister) back to England with him. Judy and John (Joanna Page, Martin Freeman) get engaged. Jamie (Colin Firth) learns Portuguese and leaves England to find Aurelia (Lucia Moniz). He finds her, proposes, and she, in broken English, says yes. 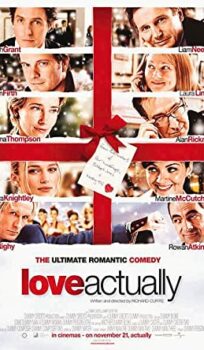