Dallas area housewife Lurene Hallett (Michelle Pfeiffer) is obsessed with Jackie Kennedy.  When she learns that President and Mrs. Kennedy will be traveling to Dallas, she goes to Love Field to see them.  A short time later, Lurene finds out that the President has been assassinated.  She wants to go to Washington for the funeral, but her husband Ray won’t allow her to go.  She decides to go anyway, but she has to travel by bus to get there.

On the bus, Lurene, who is white, befriends Paul Johnson (Dennis Haysbert), a black man, who is traveling through Washington to Philadelphia with his daughter Jonell.  When Jonell begins to act strangely, and Lurene later learns that Paul’s real last name is Couter, she thinks that the girl is actually being kidnapped and calls the FBI.  However, once Lurene realizes that Jonell really is Paul’s daughter and they are going to Philadelphia for legitimate reasons, she tells Paul she called the FBI.  Paul and Jonell get off the bus and steal a car to get away.  Lurene decides to go with Paul and Jonell to protect them from the FBI, but they think Paul kidnapped her as well and are now in hot pursuit of them.  The feds have also called her husband Ray, who knows which hotel she is planning to stay at in Washington, and owns a gun.

Throughout the movie, Lurene, Paul, and Jonell travel through the Deep South to Washington, putting up with bigotry the entire way.  Lurene has bonded with Jonell, and she and Paul even begin to show feelings for each other.  But due to various delays in their travels, Lurene will miss JFK’s funeral.  When they finally reach Washington, they go to the hotel Lurene made reservations at, but Ray is there waiting for them.  He demands that she come home now, and tries to shoot Paul for kidnapping his wife.  Lurene tries telling Ray the truth, but he won’t listen and continues to fight Paul.  Paul eventually overpowers Ray and they escape the hotel just as the FBI arrives, and they arrest Paul.

The movie concludes one year later.  Lurene and Ray have divorced, and Jonell is living in a boarding house in Dallas.  Lurene visits her constantly while Paul is in prison for stealing the car.  When Paul is released, he is reunited with Jonell, and it’s implied that he and Lurene begin a relationship together. 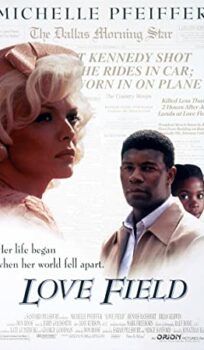