Submitted by M (Pooper) and Evan B (Longer)

POOPER:
Richard and Mildred ( Joel Edgerton and Ruth Negga) fall in love in Virginia but get married in Washington D.C. because their state still prohibits interracial marriage.

Through an anonymous tip, the local sheriff arrests the two and the court forces them to move out of the state for a minimum of 25 years to avoid jail time.  Unsatisfied with the city life, the two move back to Virginia clandestinely.

As the Civil Rights Movement grows, Mildred writes to Robert Kennedy for help, which leads to the ACLU taking on the Lovings’ case pro bono.  It eventually gets to the U.S. Supreme Court and becomes a landmark case, ending the last bit of segregation that exists in the form of state miscegenation laws.

LONGER VERSION:
Based on a true story. Taking place in the 1960s, Richard Loving (Joel Edgerton), a white man, is dating Mildred (Ruth Negga), an African American woman. The pair live in rural Virginia where interracial marriage is outlawed. Mildred is pregnant with their child and Richard proposes to her. They get married in Washington, D.C., where interracial marriage is legal. Soon thereafter, police break into their marital home and arrest them for breaking the State’s prohibition on interracial marriage. Ultimately, the pair agree to a plea deal whereby they will leave the State of Virginia for 25 years in exchange for a waiver of jail time.

The move devastates Mildred, who is particularly close to her family. They sneak back into Virginia so that Mildred can give birth there, and are arrested again (their attorney, who is friends with the Judge, essentially exchanges a favor to get the pair out of trouble this time). The Lovings try to build a life in Washington, DC, having several other children, but both miss their home. Inspired by the Civil Rights movement, and at the suggestion of a relative, Mildred writes to Bobby Kennedy for help. Kennedy apprises the ACLU of the Lovings’ situation and the ACLU assigns a new attorney named Bernie Cohen (Nick Kroll) to the case pro bono. After some initial hesitation, the couple agree to move forward with suing the State.

One morning, one of the Lovings’ children is hit by a car. Unwilling to bear city life any longer, the family returns to Virginia in violation of the law. With the situation more unstable than ever, they write to Cohen to ask him to hurry their case along (it had been floundering due to his inexperience). Cohen’s old law school professor introduces Cohen to an experienced lawyer named Phil Hirschkop (Jon Bass) who helps him get the litigation moving. The ACLU also initiates a public media campaign to raise the profile of the case and gain supporters for the Lovings’ cause (Michael Shannon does a cameo as a photographer for Life magazine). The publicity leads to several threats the family has to endure. And at least one African American friend wonders why Richard doesn’t simply divorce Mildred as that would “solve all his problems.”

The Lovings lose in Virginia State Court. One judge justified the interracial marriage prohibition on the grounds that god placed the races on separate continents and, therefore, it is against god’s will to allow separate races to interact and marry. Richard becomes more despondent with each loss, breaking down one night that he is unable to “protect” his family. Mildred remains steadfast in her belief that they will ultimately win their case and is heartened by the public support for their cause.

The case is eventually selected for a hearing by the U.S. Supreme Court. The Lovings decline to attend the argument after they learn that the opposing side will argue that the interracial ban is necessary to protect society from interracial children (which the State views to be an abomination). Richard does, however, ask his attorneys to tell the Supreme Court that he loves his wife. The Lovings win the case and all bans on interracial marriage are struck down as unconstitutional (and thus, the Lovings’ marriage and children are legally valid).

Text states that the Lovings continued to live in Virginia. Richard was killed by a drunk driver seven years after the court case. Mildred publicly stated that he did a good job protecting her and their family as long as he lived. She never remarried. 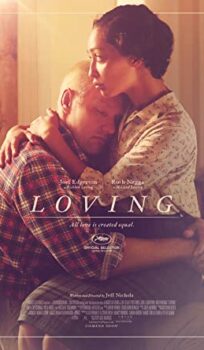