Things culminate in a showdown on the playground between Tom (Jason Biggs) and Billings (Rob Corddry) and their respective supporters. Tom makes a speech where he says that the kids are what really matters at the school, not the faculty’s pensions and tenures, and that they shouldn’t stand by while people like Billings use fear and money as a weapon, but instead stand up for the most important weapon there is: Knowledge. Billings retorts that fear and power are all that matters, and he makes a very cold-hearted speech that causes all of his supporters, except Decatur (Kyle Gass), to turn on him and side with Tom. However, Decatur then abandons him, on the grounds that the numbers game is now too much for them. Defeated, Billings walks back to his office.

School Board Chairwoman Parpadelle (Sandy Martin) then arrives, and after Tom explains the situation to her, she says she will go talk to Billings. After Tom senses that something isn’t right about that, Frankie (Zachary Gordon) comes up to him and tells him that Billings’ flunky Bartlett (Christian Pikes) – who has grown disillusioned with Billings – would be able to help them out. Tom leads everyone to Billings’ office to confront him and Parpadelle, and while doing so, Frankie and Bartlett go into Billings’ recording room. As Parpadelle announces the closure of the school to Tom and the others, Bartlett plays back a recording of what just went on in the office, and it reveals Billings and Parpadelle talking about their embezzling of school district money and then having sex. Using the recording as blackmail, Tom tells Parpadelle to go back to the school board and tell them that the school is headed in the right direction, and as of tomorrow, it will be under new management. He then nominates Rebecca (Eva Longoria Parker) to succeed Billings as principal. Her back against the wall, Parpadelle agrees to his demands.

Billings packs up and leaves, and Rebecca gives up cigarettes and her meds. We then hear a radio broadcast about Billings being fired and exposed for his corruption, and that the students and faculty celebrated their victory with a dance in the cafeteria. 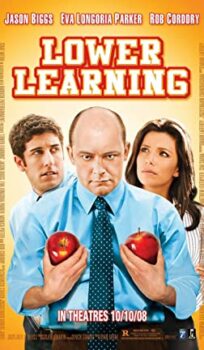