Short Version:
Chia Chi warns Yee at the last minute and he escapes the planned assassination attempt.  She and her entire cell, with the exception of the cell leader, are arrested.  Yee spares her an interrogation and signs their death warrants.  They are executed and he returns home, informing his wife their house guest will not be returning.

Long Version:
In Japanese-occupied China during WWII, Wong Chia Chi joins the drama club at her college and is recruited by the actors into an amateur resistance movement.  Their goal is to get close to Mr. Yee, a rising official in the collaborative government, and assassinate him.  Posing as a married socialite, Chia Chi becomes good friends with Mr. Yee’s wife.  While he seems interested in starting a relationship with her, he is cautious and they are never alone anywhere her comrades can strike.  Just when it seems that things might change, his family suddenly relocates to Shanghai.

3 years later Chia Chi is contacted by the true resistance movement and recrutied to finish the job she started. Now head of the secret-police, Yee is an even more desirable target, and she agrees.  She comes to stay with his family and they quickly begin a violent affair.  The affair continues for months and she eventually becomes his mistress.  Constantly waiting for word that the resistance plans to strike, an increasingly conflicted Chia Chi finds herself growing to care for Yee and begs the resistance leader to act now. He demurs, and things continue.

When the usually reserved Yee buys her a ornate diamond, she takes it for the declaration of affection it is. And when he follows her to the store to retrieve it, she panics, knowing that now the resistance can attack.  She whispers a warning to him and he flees.  She tries to leave the city but finds the roads blocked, she considers her cyanide capsule but does not take it.  That night Yee learns from his deputy that the government was aware of the resistance cell, and Chia Chi, but were unsure of his loyalties and thus did not inform him.  All save the leader of the cell having been rounded up and and after interrogation, have all confessed.  Yee asks that she not be interrogated and he signs their death warrants.  They are executed that morning – all the members of her drama club.  Yee returns to his house and goes to her room.  His wife asks after Chia Chi and he tells her she will not be returning. 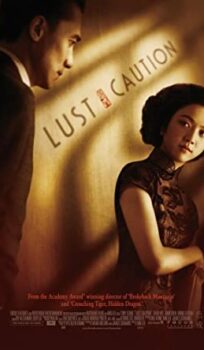