Ray and Elyse spike Dimitri’s wine with cocaine, killing him with an overdose. Ivan tells Agent Wilkers where to find Dimitri and the stolen artwork, but also plays a recording that proves the Agent’s involvement, so they can’t be double-crossed. Aton gets his money from Elyse, but also a broken nose from Ivan. The Hitler portrait was burned. Ivan, Elyse, and Ray are all now working together stealing art.

LONG VERSION
Ivan Warding (Theo James) is a professional thief who specializes in stealing artwork from the homes of the wealthy and elite in Los Angeles. A former art student, he’s doing the jobs to pay off the debt his late father, who was also a thief, owes to local crime lord Dimitri Maropakis (Fred Melamed). After Ivan steals a statue from the home of an author while he is hosting a party, he meets with Dimitri, hands over the statue, and says that he’s owes him two more jobs then he should be done. On the first of those jobs, at a party in the home of another wealthy Los Angelean, Ivan runs into Elyse Tibaldi (Emily Ratajlowski), an aspiring actress he actually met briefly at the author’s house, but her name there was Marguerite. She convinces him to pretend to be her boyfriend so she can more easily fend off the advances of a drunk Italian filmmaker who wants her to appear in his latest movie. After he finishes his part with Elyse, he says goodbye to her, then he steals a painting and leaves the house. The next day, Ivan turns over the painting to Dimitri, and he is given his next assignment. At the home of John Wolfe, a millionaire who is now a recluse living deep in the mountains, there is a collection of Nazi memorabilia, including the self-portrait of Adolf Hitler. Dimitri says that if Ivan is successful in stealing the Hitler portrait and then one other job, he will consider the debt paid in full and Ivan can walk away.

Meanwhile, the FBI is investigating the stolen statue, and Agent Lyman Wilkers (Isiah Whitlock, Jr.) is able to get a sketch of the only person at the party no one knew: Ivan. While Agent Wilkers is looking for the man in the sketch, Ivan is in the mountains, near the home of John Wolfe. Ivan sees the only security there are a pair of guard dogs, which Ivan distracts with steaks. He uses another distraction to get John out of his house, and Ivan goes inside and easily takes the Hitler portrait, then escapes through the nearby forest. Now back at home, Ivan is surprised when Elyse suddenly appears at his apartment. They go to a nearby pool hall, where she tells Ivan her story. She was an up-and-coming actress who was being pitched a role by Aton Eisenstadt (John Gatins), a big-time Hollywood movie producer. He took her to his house and tried to rape her. She fought him off, and then stole a necklace worth $250,000 she later sold, and left behind her underwear that his wife later found, which ruined his marriage. Aton tracked her down and told her that unless she pays back the $250,000, she’ll be blackballed from working in Hollywood. He followed through with his threats, and she is now a stripper and is forced to get acting roles from drunk Italians. She is also a grifter, but she’s still learning the tricks of the trade. Ivan then asks her if she’ll return the “boyfriend” favor by helping him with a job. As Ivan is leaving the pool hall, he is being followed by Agent Wilkers.

While all this is happening, Ivan’s brother Ray is temporarily living with him, having been kicked out of a flophouse for selling prescription drugs. Ray is the one who first notices Agent Wilkers, and he then tells Ivan that he read an article in the newspaper about another former art student who was found dead from an apparent mob hit. Ivan knows that other art student was also working for Dimitri. Ivan later meets with Dimitri, who tells him he has the Hitler portrait, and he will give him that and the last piece together, then he’s out. After getting the address for the last job and what the piece is, Ivan tells Dimitri that he’s being followed by the FBI, but hasn’t talked to them. That night, Ivan goes to Agent Wilkers and talks to him. Wilkers tells him that he knows he took the statue, and he’s probably knows something about the other art-related thefts in the city as well, but he’s willing to overlook them all if Ivan flips on the man he reports to (Dimitri). If not, he’ll take the fall for all of the thefts. Later, Ivan and Elyse are at the house for Ivan’s job, pretending to be interested in buying it, and afterward she tells him that she knows he stole the statue and the other painting. He then tells her that he thinks Dimitri is going to kill him after the last job, and she offers to help him. He says yes, then they go back to his apartment and have sex.

The next morning, Elyse meets Ray, then the three of them go their separate ways for the day. Right after they leave, one of Dimitri’s goons breaks into the apartment and steals Ivan’s hidden safe, presumably to get the Hitler portrait, but it’s not in it (it’s in the freezer). After Ray calls Ivan and tells him about the break-in, Ivan meets with Agent Wilkers, and he agrees to flip on Dimitri, and he tells him his plan. Elyse is meeting with Dimitri at a bar, and she is able to get him to come with her in a limo being driven by Ray. Ivan is at the house the job is at, but the art piece isn’t there. Two of Dimitri’s goons are there to kill Ivan, but he gets the jump on them and knocks them out. Ivan got the jump because he knew the piece he was supposed to steal is in a museum. With Agent Wilkers keeping an eye on the goons, Ivan goes to the house Elyse and Dimitri are at, but things there are going badly. Dimitri recognized the limo driver as Ivan’s brother, and after catching Elyse in a lie, he pulls out his gun and pistol-whips Ray. He then forces Elyse to strip and is about to rape her when Ivan shows up. He is going to kill Dimitri when both Elyse and Ray tell him to wait. Before Dimitri beat Ray, he was drinking some wine that was spiked by Ray and Elyse with cocaine. Dimitri then collapses and dies of an overdose. Ivan then calls Agent Wilkers and tells him where to find Dimitri and the other stolen art so he can close the case. He also plays a recording that proved Agent Wilkers involvement, in case he tried to double-cross them. As the FBI collect the artwork and Dimitri’s body, Ivan meets with Aton, and he pays him off so Elyse can get off the blackball list. Aton also receives a broken nose for what he did to her. The Hitler portrait was given to the person who originally hired Dimitri to steal it, and it was burned (like he said he would do to it). The movie ends with Ivan, Elyse, and Ray all working together on another art heist. 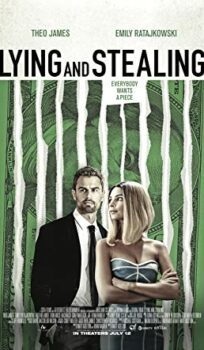