After Cady (Violet McGraw)loses her parents in a car accident, her estranged aunt Gemma (Allison Williams) becomes her legal guardian. Hoping to help Cady through her grief, Gemma builds M3GAN (Model 3 Generative Android), a lifelike robot doll that is designed to be the best friend of their owners. While Cady develops a deep attachment to M3GAN, Gemma starts to realize that the girl may be too dependent on the doll in order for her to move past her trauma.

M3GAN begins to go after people who pose a threat to Cady. She kills Gemma’s neighbor Celia and her dog Dewey after the dog bit Cady’s arm, and Celia did nothing. M3GAN also leads a bully named Brandon to his death after ripping his ear off and causing him to fall in front of a truck since he had also harmed Cady. After Gemma realizes M3GAN might be responsible, she and her coworkers Tess and Cole try to deprogram M3GAN, but the doll tricks them into escaping before she kills their boss David and his assistant Kurt (who was trying to sell off stolen files of M3GAN to rival companies).

M3GAN follows Gemma and Cady back home, where she attempts to make Gemma brain-dead so that she will be Cady’s guardian. After a fight, Cady realizes M3GAN is evil, and she uses Gemma’s college robot project, Bruce, to help rip M3GAN in two. When M3GAN turns on Cady, Gemma and Cady work together to destroy M3GAN’s chip to shut her down.

As the police arrive, Gemma’s home assistant AI Elsie begins to turn on, strongly hinting that M3GAN uploaded her mind there. 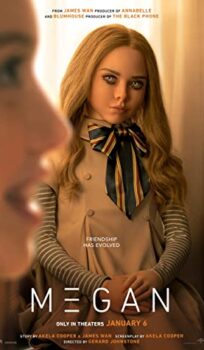