Short version:
Ma Rainey (Viola Davis) finishes her recording session and fires Levee (Chadwick Boseman) for his attitude. Levee discovers that the white music producer has no intention of letting him record his own music, after all, planning to produce his songs with white artists instead. Levee cracks when Toledo (Glynn Turman) accidentally steps on his new shoes as they prepare to leave, and fatally stabs Toledo in the back.

Long version:
Ma Rainey (Viola Davis) and her band attend a recording session in Chicago. Before she arrives, we meet her band: Cutler (Domingo Colman), Toledo (Glynn Turman), Slow Drag (Michael Potts), and Levee (Chadwick Boseman). Levee wants to do his own music and is on a high because he has new compositions to turn in to the white music producer, Sturdyvant (Jonny Coyne). He’s even spent an entire week’s wages on a pair of new shoes. Cutler and the others try to encourage Levee to tone down his ambition since they’ve been hired to do Ma’s music, but Levee convinces Sturdyvant to let them practice his own arrangement of the song “Ma Rainey’s Black Bottom” — even though Cutler warns him that Ma will never agree to sing his version, so it’s pointless.

When Ma arrives, Cutler is proven right as she refuses to use Levee’s arrangement by threatening to walk if they don’t do it her way. Ma further insists that her nephew, who stutters, should deliver a line on the album even though it will take numerous takes and cost the label more money to make it happen. She is uncomfortable working with the white producers, knowing they will take advantage of her while she earns them money if she lets them, so throughout the movie she is in a constant state of battle with them–even refusing to record until they bring her the Coca Cola that she had been promised and they failed to provide.

During breaks in the recording session, Levee seduces Ma’s girlfriend Dussie Mae (Taylour Paige), gives his own music compositions to Sturdyvant, and continues debating with his bandmates. The bandmates tease Levee for getting into bed with white people, prompting Levee to angrily reveal his traumatic past (his mother was gang-raped and murdered by white men, who then also murdered his father). Levee promises that he is not going to let white men take advantage of him, he is only playing their game until he can get in a position of power. Levee and Cutler later get into an argument about religion–with Levee saying that if there was a god, he would care for black people–and Levee pulls a knife and threatens Cutler with it.

Ma fires Levee as soon as the recording session is finished, telling him that his attitude is bad for the band (he has been clashing with her the whole day). He claims not to need her. After Ma leaves, Levee corners Sturdyvant about his music. Sturdyvant tells him that he will pay him for the compositions but will not be allowing Levee to record his own music, after all, implying that it’s better suited to other (white) artists instead.

As the band packs up to leave, Levee’s emotions escalate. Toledo accidentally steps on Levee’s brand new shoe, prompting Levee to pull his knife and fatally stab Toledo in the back. Cutler and Slow Drag leave in horror while Levee cradles Toledo’s body.

The last scene is a large band consisted entirely of white people recording one of Levee’s songs in Studyvant’s studio. 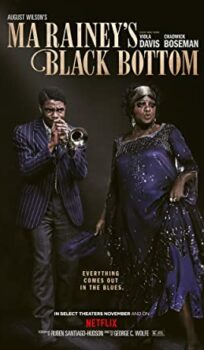