Government agents find out that Mac is at Eric (Jade Calegory) and Michael’s (Jonathan Ward) house and radio for a capture team, but they and Debbie (Lauren Stanley) figure out that the agents are on to them, so Eric and Debbie hide MAC in a teddy bear suit and take him along to a birthday party at McDonalds that they were invited to. The agents follow them there, and Eric alerts Michael – who has just arrived there – about them, and he in turn tells his love interest Courtney (Katrina Caspary). Once MAC sees the capture team arrive, he flees the restaurant with Eric, and they lead the agents on a chase through the streets and into the department store where Eric’s mother Janet (Christine Ebersole) works. Eric gets her attention, and she chases after the agents when she sees them coming after her son. After Eric and MAC get back outside, Michael, Debbie, and Courtney drive up to them in their van and pick them up, and they all get away from the agents. One of them admits to Janet that the kids have an alien with them, and Janet finally realizes that her son’s stories about MAC were true.

The kids later decide to find MAC’s family, and they follow his clues on their whereabouts until they find them dehydrated and clinging to life in an abandoned mine out in the desert. After reviving them, they drive back into town with them and stop at a gas station so they can get some drinks for them and so Michael can call Janet at her workplace. While Michael finds out that Janet had left earlier on, the aliens get out of the van and go into a nearby grocery store to get food and cause a disturbance. The kids come in soon after, and despite them trying to convince the store’s security guard that the aliens are harmless, MAC’s father naively takes the guard’s gun and stirs up a panic. Officers from the sheriff’s department then suddenly appear and force the kids out of the store and behind their vehicles.

The aliens leave the store and make their way back towards the van with some food and drinks and the father still holding the gun, and the sheriff tries to tell the father to drop the weapon, but Courtney informs him that none of the aliens understand him. Eric then offers to stop them, but when the sheriff refuses, he suddenly wheels out towards them. An officer who tries to get him trips and makes his gun go off, and MAC’s father turns around with the gun held up like he is going to shoot, causing the other cops to open fire. Their bullets strike the gas pumps near the aliens and cause a huge explosion that blows up the entire gas station and seemingly kills them, and the force of the blast kills Eric. Janet then arrives in a helicopter with some agents and scientists, and she is brought to her dead child. Just then, the aliens emerge unharmed from the fire, and they gather around Eric and use their special powers to bring him back to life.

For saving Eric, MAC and his family are accepted into society and later get sworn in as American citizens, with their new friends present for it. As Eric and Debbie are riding with the aliens in their car, MAC chews on bubble-gum and eventually blows a bubble that bears a message saying “We’ll be back!”, implying a sequel (which has never been made, and will never be made, after this film flopped with both critics and moviegoers). 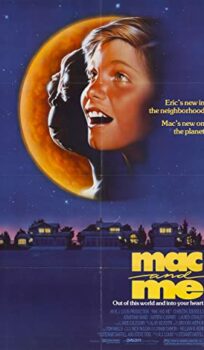