Near-mythical Mexican Federale “Machete” (Danny Trejo) evades many attempts on his life. Machete is wounded and left for dead after his wife is de-headed in front of him by drug lord Torres (Steven Seagal).

Afew years later Machete turns up as an illegal in Texas. He interacts with Luz (Michelle Rodriguez) a food cart owner who runs ‘the network’ for illegals. Immigration officer Sartana (Jessica Alba) is monitoring Luz.

Lots of people are hacked up, and shot up. Machete does a great Die Hard move with a bad guy’s intestinal tract – going out the window with it – to smash in John Shaft style one floor below. Hiding out Machete spends time with both Luz and Sartana.

Subplot:
April (Lindsay Lohan) is the Candidate Assistant’s drugged up slut daughter. Somewhere along the line – Machete gets April (and her mother June) naked in a pool, and then roofied out on spiked Tequila. They end up with the priest. They wake up naked. April finds a Nun’s Habit and proceeds to find her father’s killer – so she ends up at the melee in the end – dressed as a nun, spraying a lot of machine gun fire around – she lives.

Machete gets legal papers from Sartana but doesn’t want them and drives off into the night with Sartana straddling him on his motorcycle.

Credits roll with a voice over

FYI all the pieces from the Machete Grindhouse faux trailer (concept) are in the movie. 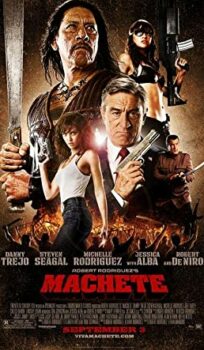