Max (Mel Gibson) is wandering the wilderness with a camel team towing his vehicle when propeller-plane pilot Jedediah (Bruce Spence, in a different role than the Gyro Captain from “The Road Warrior”) and his son Jedediah Jr. (Adam Cockburn) steal his camel train and his vehicle. Max comes across BarterTown, which is run by Auntie Entity (a dynamic Tina Turner) in grudging partnership with Master-Blaster, a midget (Angelo Rossitto) and a giant (Paul Larsson) tandem that controls the underground methane production facility (generated by huge vats of pig manure) that powers BarterTown. Max cuts a deal with Auntie to kill Blaster in the arena called ‘Thunderdome’, a dome structure made of wooden sticks where combatants are hung by bungee cords and fight each other with weapons stuck all over the dome’s interior. In return, Max would get all of his possessions back. But when Blaster is unmasked during the battle and turns out to be a simpleton, Max cannot bring himself to kill Blaster. Blaster is shot with arrows by one of Auntie’s men and dies. For breaking the deal, Max is exiled into the desert where he is saved by a tribe of children living in an oasis and led by a teenage girl, Savannah Nix (Helen Buday). The children believe Max to be ‘Captain Walker’, a pilot that can fly the wreckage of a passenger jet to ‘Tomorrowland’. When Max bursts their bubble, Savannah leads some of the children into the desert to find Tomorrowland. Max and some of the other kids rescue the wayward group before they are swallowed up in the sand. The group sneaks into BarterTown and with the help of Pig Killer (Robert Grubb), they rescue Blaster, destroy the underground methane production complex and take Master’s locomotive house out of the underground on a railroad (that’s in surprisingly good shape) into the desert. A chase ensues, with Auntie and her horde following in cars. When Jedediah Jr. blocks the railroad, Max makes Jedediah fly the kids and Master out of danger. Max clears the way for the plane to take off by crashing his vehicle headlong through the approaching convoy of Auntie’s men. Auntie survives, finds Max lying in the sand and chooses not to kill him. She smiles at him and leaves him alone in the desert. Jedediah and the rest fly to the ruins of Sydney, Australia where they settle and Savannah is shown relating the story to a new generation of children. Don’t worry, folks, Mad Max 4 is in production. The saga won’t end like this. 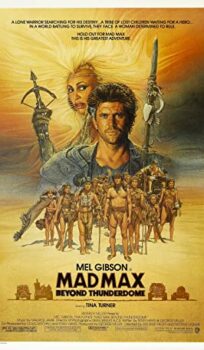