(Diane Keaton) finds out from her neighbor that her husband put their house for sale.  Ted Danson has been out of work for quite awhile.  They have a minor meltdown together. Diane is looking for jobs.  She isn’t qualified for anything.  She tries an agency where she has even less hope. Her house keeper shows up wanting her pay in cash since the check hasn’t cleared for three times. The housekeeper gives her a card who will give a job with insurance to people without felonies.  Diane didn’t know the housekeeper has a record.

We then see scenes of her working at the Federal Bank in Kansas City. She observes the people on her job such as Queen Latifa who destroys money and Katie who pushes money to Latifa.

At home later her sink messes up. She tries to get Danson to fix it, but he is clueless. We see her going to home depot where she begins getting the ideas for heist.  Her writes out her plan on her laptop.  She ends up meeting with Katie and Latifa at a BBQ joint.  Many of their meetings are there. You will see the importance of this place later in the movie.

The begin stealing the money, but they can’t spend it yet.  They don’t want to draw attention to them.  Danson comes up with some cover stories.

They talk one of the security guards into the scheme.  There is a tense scene when Queen drops the lock down the bathroom drain where many meetings take place.  She finally gets the key.  Cute scene in the elevator with two unsuspecting guys.  They have to stay on their schedule, so they can’t go back on floors they have already been on. The security guy notices the key switch by accident.  He meets with Queen in the parking lot and tells them they need to stop.  Queen passes this info on, but Diane doesn’t want to stop. Queen talks the guy into helping and they of course find out how much they like each other.

Then a mysterious man shows up at Diane’s and Ted’s party. Then the girls  see this same man at work. They meet together later to discuss if their gig is up.

Later that night the cops are sitting outside of each others houses.  Everyone gets caught but Diane.  She snuck out.  She gets a lawyer and they all get off.

Six months later they meet.  You see that the BBQ place has some minor changes.  They all meet down in the cellar.  There we see all this money that Diane had stashed for everyone. 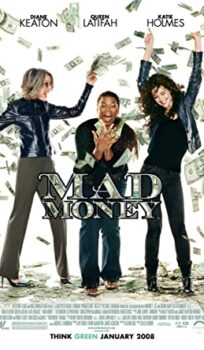