The penguins hijack the zoo transport ship, and head to Antarctica. Alex the Lion (voice of Ben Stiller), Marty the Zebra (voice of Chris Rock), Gloria the Hippo (voice of Jada Pinkett Smith) and Melman the hypochondriac Giraffe (voice of David Schwimmer) end up marooning themselves on Madagascar after they knock their crates overboard during an argument. When Alex’s carnivorous instincts take over, and it looks like he won’t be able to stop himself from eating his best friends, he banishes himself to the “Foosa” (hyena) side of the island. The penguins, having decided that Antarctica was too cold, return to Madagascar and save the day by opening a sushi bar for Alex. 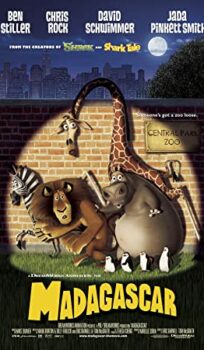