Hal (Ted Danson) discovers, through his blood donation -after it was analyzed by the hospital’s laboratory-, that his blood type is actually O+.  Therefore, since Zora (Nia Long) is AB-, he is NOT her father.  Looking despondent, he goes over and tells Zora and Sarah (Whoopi Goldberg) about it.  The explanation was that files from all donors got somehow mixed up when the sperm bank went computerized.  Zora runs off sad and tearful, and tells her best friend Tea Cake (Will Smith).  He comforts her.

However, days later, Zora’s high school graduation takes place.  Just as she is about to accept her special Westinghouse science award, and calls Sarah -who is wearing a leg cast from her accident- up to the podium to share the price, Hal shows up.  He decided to have both women as part of his life, anyway, and to embrace Zora as his daughter.

The movie ends with a big dance-off and sing-off among the graduates, with Sarah and Hal celebrating along with them. 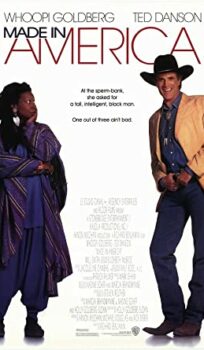