When Don Cortino (Lloyd Bridges) visits his sons Anthony (Jay Mohr) and Joey (Billy Burke) in Las Vegas after recovering from an assassination attempt, he tells everyone at a birthday party his sons hold for him that the reins to his empire will be turned over to Anthony when he dies, and Joey will be in charge of his operations in Wisconsin. While Joey is fuming over his father’s decision, Anthony’s girlfriend Pepper (Pamela Gidley) comes up to him and tells him that it is an insult that he got passed over and says that she can help him become Don, then starts to seduce him. Later, Anthony returns to his suite in the Peppermill Hotel & Casino and catches Joey sleeping with Pepper. After cursing them for their betrayals, he leaves the hotel and gets in his car, but it suddenly explodes when he turns it on (which is the opening scene of the film). Pepper calls someone on the suite’s phone and tells him that the deed is done, and then we see Don Cortino getting killed with a lethal dose of malathion by Joey’s young son, Chucky.

When Anthony – who survived but ended up badly disfigured (albeit temporarily) – attends his father’s funeral, he spots Chucky receiving a payoff from Don Marzoni (Tony Lo Bianco), the guy who had hired him to mind the Peppermill, and he realizes that Marzoni ordered his father’s death (Marzoni was also the man who lost his thumb to a young Cortino back in Sicily over sixty years ago and had been wanting payback on him for that ever since). Anthony decides that he must get revenge and take full control of the family business, but he must first get his life back on track, and that means that he has to find his old love, Diane (Christina Applegate).

Diane – who is now the President of the United States – is visited by Anthony at a press conference she is holding just before she is about to sign a treaty with other world leaders guaranteeing world peace like she dreamed. Anthony tells her that he has taken over the mafia and needs her, so he has come here to ask her to marry him and come home with him. Diane is hesitant to do so because she is close to achieving her lifelong goal, but then Anthony surprises her by presenting her with their son, also named Diane (T.J. Cannata), whom she never knew she had (don’t try to make sense out of it). This sways Diane into agreeing to tie the knot with Anthony, and she decides to postpone the world peace agreement until after the honeymoon.

Just before the wedding ceremony begins at the church, Anthony confronts Joey in private and accuses him of having a hand in their father’s murder and his own assassination attempt. He also tells him that today is the day he will be settling all family business, then lets him know that he has arranged to send him to Fargo, North Dakota. Joey ends up confessing that Pepper got him together with Marzoni, and Marzoni had promised him the leadership of the mob if he helped him get rid of Don Cortino and Anthony. Anthony tells Joey that he never wants to see him again and then leaves to get the ceremony underway. While the wedding is in progress, Anthony’s grandmother Sophia (Olympia Dukakis) and a few other henchmen kill Pepper, Chucky, and Marzoni in ridiculous ways.

A few days later, Diane furiously confronts Anthony – now officially the Don – in his office with a newspaper article that unequivocally states that Anthony had the aforementioned three people killed, and she demands to know if he is indeed responsible. He replies with a simple “no,” and she immediately believes him before sheepishly walking out. We last see that Anthony also ordered the Northern mafia leader, Nick “The Eskimo” Molinaro, to kill Barney the Dinosaur, and Nick dances joyfully once he carries out the hit.

During the credits, scrolling title cards reveal what became of the most prominent characters: 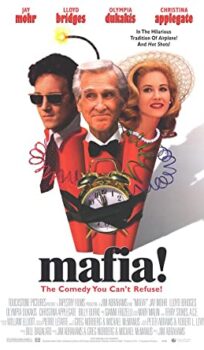