As Maggie Vogel’s (Abigail Breslin) “Necroambulism” symptoms increase, to the point where she partially devours a live fox, her stepmother Caroline (Joely Richardson) orders her father, Wade (Arnold Schwarzenegger) to allow Maggie to go to a quarantine center, before leaving for a relative’s house.

Some time later, a pair Officers arrive, intending to take Maggie away. Wade tussles with one, before Maggie arrives and shows that she still has control over her mental faculties.  Sherriff Pierce (Douglas M. Griffin). then intervenes, giving Wade an ultimatium to have Maggie ready the next time they arrive.

Later in the day, Wade relaxes in a chair with his shotgun, which he still is unable to use on his daughter, when he hears her coming downstairs, and feigns sleep. Maggie now has the appearence of a completely affected zombie. As Wade waits in suspense, Maggie walks sluggishly over to him, leans over him, sniffing at his flesh … And kisses him tenderly on the forehead. Maggie then leaves her father in the room, climbs up to the top of the house’s roof, and leaps to her death. As she falls, her mind is filled with the warm childhood memory of her late Mother and her before the plague, planting daisies in the backyard. 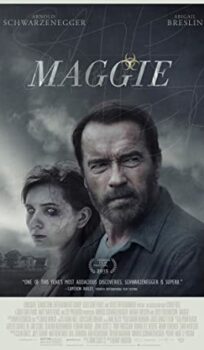