Wanda (Harley Jane Kozak) ends up placing Jack (Mark Harmon) in a local mental hospital for observation after noticing that he has been exhibiting the same “psychoses” as her other patients who claim to have been possessed by Orky. The following day, Josh (Joshua Jackson) goes down to the dock behind his family’s house and sees Ashley (Sarah Wayne) leaving out Oreos by the edge of it again hoping to attract Orky, and when he asks what they are for, she tells him that they are for Orky and she believes that the creature might be able to help them. Josh lashes out at Ashley, telling her that she needs to grow up and relinquish her belief in Orky’s existence because they are at risk of losing their father over it.

Later on, their neighbor Uncle Kipper (Frank Salsedo) gets their attention by carving their father’s name into his porch railing, and he silently communicates to them that they must bring him some coffee sweetener. Once they get it for him, he waits until his nurse is distracted before emptying his pill cup full of sedatives into her beverage and then putting the sweetener into the pill cup, so when he swallows the sweetener in front of her, she doesn’t suspect a thing. Once she drinks her beverage and passes out, Kipper tells the kids to take him to a special place out in the forest, saying that it can help their father. The journey goes into the night, and they eventually arrive in a place that has a bunch of totem poles standing around, and the kids find that one of the poles has Orky carved into the top of it. Kipper tells the kids an old story about how, ages ago, humans could transform into animals and vice-versa, and when Josh asks what this has to do with Jack, Kipper explains that toxic waste is being dumped into the lake and is killing Orky, and Orky had possessed Jack (and Wanda’s other patients) as a way of trying to tell people about the waste. Kipper then tells Ashley that he is glad that she believed, and her belief is why Orky came to her. He then tells them to leave him where he is and go inform their father that he is a messenger for Orky. Meanwhile, Wright Hardy (Adrien Dorval) and his brother Lefty (Mark Acheson) – who have been dumping the waste for Mack Miller (Morris Panych) – warn Miller that they earlier saw that the team of Japanese researchers trying to locate Orky have come within fifty yards of the dump site, so he replies that they must now enact “Plan B.”

Ashley and Josh go into their father’s room and try to tell him about what Kipper told them, but they find him doped up on drugs. They manage to sneak him out and take him back home, but shortly after their return, the kids are visited by Hiro (Willie Nark-Orn), the son of one of the Japanese researchers, who has just seen what he thinks is Orky. Since he is unable to tell them what he saw because of his inability to speak English, he takes Ashley’s hand and leads her towards where he saw Orky heading, and Josh grabs his camcorder and follows. The kids then find and follow what they believe is Orky all the way to Miller’s factory, and they discover that it is a submarine resembling Orky when it stops at the factory’s dock and Miller and the driver step out of it. Josh now thinks that Orky is definitely a hoax, but he also suspects that something shady is going on, so he and the others sneak into the factory and find hazardous waste barrels everywhere. Miller then gives the submarine driver a wad of cash and instructs him to land the false Orky on shore in the middle of town and confess that Orky was just a hoax designed to create a tourist industry. That way, no more foreigners can explore the waters to try to find it and the Natives will stop complaining about how his company is threatening an endangered animal, which will enable him to quietly carry on with his vile practices. Josh records all of this on his camcorder and then tells Ashley and Hiro to keep a look out while he heads out to the sub to try to figure out a way to sabotage it. Ashley and Hiro soon try to leave to join up with Josh, but they make noise, which Miller hears.

Ashley and Hiro enter the submarine and find Josh trying to start it up (feeling that they can use this as evidence), and they tell him that they were heard and they need to get out of here. However, they are forced to hide when the driver comes in to start up the sub, and Josh decides that they will just have to wait until he gets out and then go to the police. The driver steers the sub in the direction of Joe’s (Ben Cardinal) Orky Emporium, then hops out and swims away when it is close enough to run aground. Josh takes the controls and tries to steer the sub away, but he finds it is on a collision course with a boat. When he tries to drive around it, he activates the flamethrower in the fake Orky’s mouth, which sets the ship on fire and blows it up. The blast makes a small breach in the sub’s hull and water starts to slowly come in, and the kids find that the exit hatch is jammed, leaving them trapped in the sub as it sinks to the bottom of the lake. Seeing the fate of the vessel in his binoculars, Miller realizes that it has gone down right above the dump site. In the morning, Jack wakes up and notices that his children are missing, so he resumes digging in the deep hole he dug in the backyard, trying to “dig his way to China” in order to find them. Wanda and an orderly show up to bring him back to the mental hospital, but before Jack can climb out, the ground under him gives way and he falls into the abyss.

The next morning, the submarine driver speaks with Sheriff Stevenson (Tamsin Kelsey) about the sub and how Orky isn’t real, and Miller and the Hardys watch this from afar. Miller tells the Hardys that the police will now try to locate the sub and will thus find the waste barrels, so he orders them to rig the dump site with explosives to destroy the evidence. Meanwhile, as the kids are trying to stay alive, Ashley bangs on the hull every now and then hoping to summon Orky, despite Josh’s insistence that Orky doesn’t exist. They then spot the Hardys setting dynamite on the barrels, but before they can complete their task, the real Orky suddenly appears and scares them away, and after checking on the kids through one of the portholes, he carries the submarine away from the area. The Hardys quickly return to their boat, but they are met by another boat carrying Sheriff Stevenson and a team of divers, and then one of the barrels floats up to the surface. Feeling like they have been caught, the Hardys blurt out to Stevenson that they were just following Miller’s orders, and they get taken into custody (it is later shown that Miller was also arrested off-screen and his factory was closed, with it slated to become Uncle Kipper’s Orky Museum in the near future).

Orky takes the kids to his cave, and there, the hatch is opened by Jack, who had fallen down into this place. Jack mentions that he was here before in his “dream” (when Orky possessed him), and after Ashley realizes that this cave is Orky’s home, they hear Orky make droning sounds and follow them until they see him resting nearby. They approach him, and Ashley thanks him for saving their lives, but they all sadly find out that he is near death from toxic poisoning, and he perishes moments later. Sometime afterward, rescue crews lower a rope down through the hole that Jack fell through, and they get Jack and the children to the surface, where Hiro is reunited with his father. Jack tries to tell the news crew present that there is nothing in the cave so Orky’s body will not be discovered, but they make preparations to send someone down to get a shot of the interior for the story. Just then, Kipper – who is still at Orky’s totem pole – performs a ritual that results in a sudden rainstorm, and bolts of lightning strike the hole and scare everyone away from it before the wind and rain quickly seal it up.

The next morning, Jack – now free from the institution – talks to Wanda about Orky, and she says that she finds it all to be irrational, but she wishes that she could see things the way he does. Ashley is depressed over Orky’s death, but Jack reminds her that somebody is only gone if you let them be. That night, Hiro stops by for a sleepover, and he and Ashley lay out some Oreos on the dock in tribute to Orky before falling asleep there. The following morning, Ashley wakes up and sees that the Oreos are missing their cream centers, and she joyfully screams, realizing that Orky is alive (or has been reincarnated). Just then, Wanda is seen sitting on a dock, and she suddenly gets possessed by Orky, turning her into a believer. 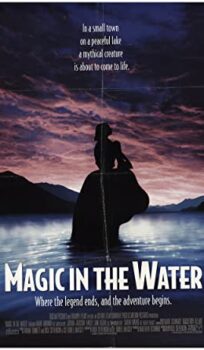