SHORT VERSION:
The day before the Virginia Military Games, Major Payne is offered an assignment in Bosnia and a preliminary promotion to Lieutenant Colonel, which he accepts after he is told that he won’t get another chance to be Lieutenant Colonel if he refuses. Of course, this means that he will miss the games and disappoint Emily and the cadets.

However, while waiting for his train to Washington the next day, Payne has a daydream where he, Emily, and Tiger are a happy family, and he finds it quite pleasing. This spurs him to turn down the assignment and go to the games to support his cadets. His cadets end up defeating the rival Wellington Academy cadets to win the games.

Three months later, at the start of the new school year, a mellower Payne is shown to still be an instructor, and he has settled down with Emily and Tiger. However, when a new blind cadet makes wisecracks at him, he proceeds to shave both him and his seeing-eye dog bald with his field knife and laughs, showing that his sadistic nature has not completely left him.

LONG VERSION:
Over the course of the film, Major Payne (Damon Wayans) softens up a bit and falls in love with Emily (Karyn Parsons), and he (uneasily) bonds with all of his cadets, especially Tiger (Orlando Jones), and he molds them into a solid team.

However, the day before the Virginia Military Games, General Decker (Albert Hall) pays Payne a visit and tells him that there is a situation in Bosnia that requires his services, and thus he has been reinstated into the Marines at the rank of Lieutenant Colonel. However, he must leave for Washington tomorrow for the mission briefing, which will prevent him from making the games. Initially hesitant, he ends up accepting the assignment when he learns that he will not get another chance to become Lieutenant Colonel if he refuses it. His decision greatly disappoints Emily and the cadets, though he encourages Cadet Sergeant Stone (Michael Martini) to lead the squad to victory. The next day, Stone tells his fellow cadets that they must forge on without Payne, knowing that they put in too much hard work to come out of the games empty-handed.

As Payne waits for his train, he has a daydream where he is living in a nice house, and Emily is his wife and Tiger is his foster son, and he finds it all quite pleasing. Meanwhile, his cadets make it to the finals against the cadets of rival Wellington Academy, but they get into a fight with them when Dotson (Andrew Harrison Leeds) – a former Madison cadet who got transferred to Wellington by his father so he could escape Payne – cheats to win the relay race by tripping up and injuring Stone, and Cadet Williams (Damien Wayans) punches him out in retaliation. Williams gets disqualified from the last event, but the commander of the Wellington cadets is not satisfied with this, and appeals to Colonel Braggart (Ross Bickell) to disqualify all of the Madison cadets. Payne suddenly shows up to defend them and secure their spot in the last event. Payne confesses to the cadets (with some prompting from Emily) that he came back because he liked them and wanted to see them win.

When Stone informs him that, since he is injured, the team has no one to lead them in the routine, Payne puts Tiger in charge of it. The group then does an unorthodox but very catchy routine that ends up giving them the win and the tournament trophy, and Stone wins an award for Individual Cadet Achievement.

Three months later, it’s the start of a new school year, and Payne – now a little mellower – is shown to still be an instructor, and he has settled down with Emily and Tiger. When a new blind cadet makes wisecracks at him, he proceeds to shave both the cadet and his seeing-eye dog bald with his field knife and laughs, showing that his sadistic nature has not completely left him. 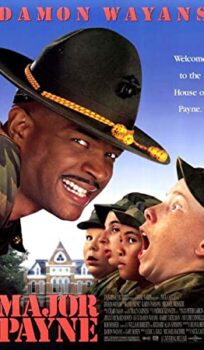