Short pooper:
Nino (Gaetano Aronica), Malena’s (Monica Bellucci) husband, was not killed in the War; he returns, but Malena was run off town by everyone, their house was occupied by squatters, and no one would inform him of where she was. Renato (Giuseppe Sulfaro) leaves him an anonymous note, telling him what happened. Another year passes by; Malena and Nino return together, and people, in awe, stop thinking poorly of her and treat them both respectfully. By chance, Renato and Malena run into each other and, for the first and only time, have a brief, friendly interaction.

Longer version:
Destitute and with no other choice after the death of her father -since no one would employ her either-Malena makes the painful choice of resorting to prostitution, which gets her disowned by the entire town. Even Renato is shocked to see this drastic change in her: when he catches wind of her in an orgy with invading Nazi soldiers, he faints; his mother (Matilde Piana) believes it to be “the Devil possessing the boy,” but his father (Luciano Federico) retorts that “the boy is just turning into a man and needs to have sex immediately.” Being taken to the local brothel for “initiation” by his father, Renato fantasizes, all throughout the act, that he is, instead, having sex with Malena.

When the Americans liberate the town towards the end of the War, the townsfolk see this as an opportunity to get rid of Malena for what they perceived as collective embarrassment brought upon everyone by her; she is accused of cooperating with the Nazis, forcefully dragged to the middle of the public square, beaten and humiliated by having her clothes ripped off her and her hair crudely cut off, while she cries in despair for help and everyone just laughs in mockery. To avoid further torment, she flees.

Shortly after, Malena’s husband, Nino, who was believed dead in combat, does return alive, although missing an arm. He discovers the house in shambles and overtaken by squatters, and when he asks around about Malena, everyone just refuses to tell him, most likely out of shame. Renato, however, catches wind of the situation and wants to help, but not feeling confident about facing the man directly out of guilt for feeling he didn’t do enough to help the disgraced woman, leaves Nino an anonymous note stating everything that happened and that Malena had to move to Messina, but never stopped loving him nonetheless. Nino receives it and leaves.

One year later, Nino and Malena return to Castelcuto together, visibly happy and in love, and Malena looks simpler than before, although very recovered and still beautiful. The townsfolk, seeing that “she is acting again like a respectable married woman”, treat her accordingly and no longer fear her. As she is walking home from buying groceries, some fruit falls off her bag, and Renato -who has grown since and now looks more like a young man- happens upon her to help pick it up. She smiles at him slightly -probably oblivious to the impact she had had on him all that time-as thanks him and walks away, while all Renato can say is: “Good luck, Mrs. Scordia.” This was the only time they ever had a direct exchange.

The film ends with an adult Renato, in voiceover, reflecting how, despite him having met many women throughout his life and them asking to be remembered by him, the only woman he was never able to forget was Malena. 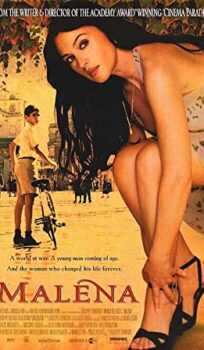