Brodie (Jason Lee) and T.S. (Jeremy London) appear on the dating game show Truth Or Date where Brandi (Claire Forlani) is participating in as a contestant per a request from her father (Michael Rooker), and T.S. with some helpful words from Brodie to make his case is able to get her back after he proposes marriage to her and she accepts.

Brodie soon takes center stage, and he professes his love for Rene (Shannen Doherty) in front of her new beau Shannon (Ben Affleck), and due to being charmed by him participating on the show and using his extensive colorful vocabulary, she returns it. The cops arrive to arrest Brodie and T.S. for breaking the mall security’s ban on them, and Shannon goes up to do a pounding on Brodie. Brodie calls out for Silent Bob (Kevin Smith) to play the tape the 15-year-old Tricia (Renee Humphrey) made between her and Shannon as part of her study on sex with men aged 15-35, but Silent Bob was still struggling to get the tape, wedged out of his reach in the light rigging. Willam (Ethan Suplee), angered and terribly frustrated by the fact that he couldn’t see the sailboat in one of those Magic Eye posters, kicks the light-rigging pole, causing the tape to come up into Silent Bob’s hands (he thinks he got it trying out the Jedi mind movement trick, which he was attempting throughout the film).

Silent Bob plays the sex tape, and Brodie tells the police and the audience that Tricia is 15, and Shannon is arrested. Brodie and Rene meet up, where he tells her he’ll bring her over for dinner tomorrow evening to meet his mom (he never wanted her to meet his mom before then), and they kiss. The network executives checking out the game show come up to Brodie and said that they liked what he did up there, and asked if he wouldn’t mind hosting his own talk show.

The end scenes show that Brodie took over the hosting duties on the Tonight Show, but still lives with his parents, and Rene became Brodie’s band leader and was well-liked by his mother. T.S. & Brandi got married after graduation on the Jaws ride at Universal Studios. Tricia’s book spent a record 72 weeks on the New York Times Best-Seller List, with a movie about it due out at Christmas. Shannon made a lot of new friends at Rahway State Correctional Facility (if you know what I mean), and Willam eventually saw the sailboat in the poster. And, in an omen of the later film Jay & Silent Bob Strike Back, it shows Suzanne the orangutan hooking up with Jay (Jason Mewes) & Silent Bob and walking into the sunset. 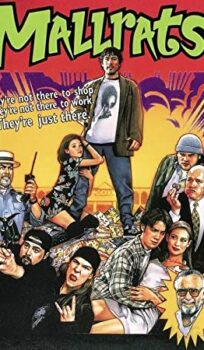