Tom Dobbs  (Robin Williams), a political comedian (a la Jon Stewart) decides to run for the presidency. He wins due to a glitch in the computer. Instead of sliding it under the rug, he announces this glitch and steps down, becoming even more famous and returning to his tv show. TIME magazine names him “Man of the Year,” hence the title.

Second plot:
Elenor Green (Laura Linney) works for the company that created the electronic voting program. She discovers the glitch and is persecuted until the very end. She becomes Dobbs’ producer/lover. 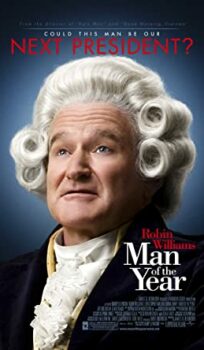