A Mandingo slave named Mede (Ken Norton) is bought, and then trained to be a fighter in brutal “to the death” events.

Hammond marries Blanche (Susan George), but he rejects her after discovering that she is not a virgin.  Hammond takes up with a slave girl, while Blanche takes up with Mede.  Blanche gets pregnant and delivers a black baby.  The baby is bled to death by the doctor but Hammond sees the baby before it is disposed of.

After learning the truth, Hammond poisons his wife, and tells Norton to build a fire to boil water in a huge cauldron.  Once the water is boiling, he tells Mede to get in.  Mede declines, so Hammond shoots him, throws him in the cauldron and keeps him in with a pitchfork!  During the chaos, a slave grabs a gun and kills Warren.

Hammond is left with no family. 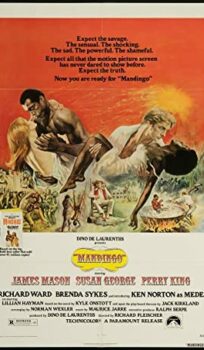