Short pooper:
Herman J. “Mank” Mankiewicz (Gary Oldman) and Orson Welles (Tom Burke) win, together, the Best Original Screenplay Oscar for Citizen Kane, but they neither are present at the ceremony to accept the award nor are on good terms with each other, since Mank has all but burnt bridges with many important people in the film industry, due to his alcoholism and acerbic attitude.

Longer version:
Mank slowly finds himself at odds with everyone important in Hollywood around him, including his confidant Marion Davies (Amanda Seyfried), because he refuses to relent and allow major changes to the script of Citizen Kane -which would basically reduce his own contribution to nothing-, in exchange to become relevant once more. Things hit a critical point when he decides to crash a costume party being held at the estate of media mogul Bill Hearst (Charles Dance) and, in a drunken stupor -which includes a vomiting scene that nauseates everyone present-, declares his intention to see the movie made. An enraged Louis Mayer (Arliss Howard) disowns him, calls him a “court jester” and declares he, as well as many others, is on Hearst’s payroll.

Orson Welles visits Mank, commends him for the fine work he has done, and expresses his determination to push the movie forward himself and do a script rewrite without Mank, but while properly compensating him financially for it, which Mank rebuffs, demanding credit in turn. The resulting tantrum and angry departure by Welles is juxtaposed with a sequence in which, in the aftermath of Mank’s scene at Hearst’s, Hearst sees him out while telling him of the Parable of the Organ Grinder and the Monkey (“you are nothing but a slave of the system; you do what others in power tell you to, for money, yet you bear the illusion that things happen just because you collect the money when, in reality, is for the boss”).

In the end, Welles and Mank win, together, the Best Original Screenplay Oscar, in 1942, for Citizen Kane, but neither of them attends the Academy Awards’ ceremony; instead, George Schaefer (Glenn Edward), the President of RKO Pictures, collects the award, as Welles was working on the film “It’s All True” in Rio De Janeiro and Mank simply decided to skip it. Moreover, it is noticeable that they didn’t recover from their fallout, despite this shared triumph, and they both agreed on how biased and elitist Hollywood is as an industry (Citizen Kane was considered a favorite to win Best Picture and be the awards-sweeper of its year, but the Academy refused to acknowledge it).

Title cards, prior to the film’s end, inform that Mank never worked again with Welles -or contested a screenwriting credit with anyone else- and died of alcoholism complications, 11 years later, at the age of 55. 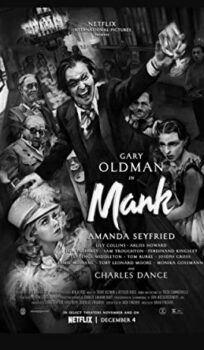