At EMAX, Max was crossbred with the DNA of several wild animals, and through it inherited their survival traits to become a highly intelligent “perfect animal”. These traits made him capable of being a lifesaver, but since he also inherited the aggressiveness of these animals, he was also very dangerous, for he would attack and even kill anybody that he felt was threatening him or whomever he saw as his master in even the slightest way.

When Lori (Ally Sheedy) sprung him from the EMAX laboratory, he was on a supply of drugs used to suppress his highly aggressive tendencies, but the separation from them while under her care allows those tendencies to take over, resulting in him killing some people and pets, and he also forcibly mates with Rudy’s (J.D. Daniels) collie Heidi. One day, Max severely injures Lori’s husband Perry (Fredric Lehne), and the cops – who know of Max’s abilities from Dr. Jarret (Lance Henriksen), the scientist who crossbred Max (and whom they suspected was hiding the body of an EMAX employee that Max killed in order to protect Max and, by extension, his financial future) – come to the scene soon after to kill him, but he escapes them.

Max returns to Lori’s house in the evening, killing a couple of the cops watching her, and when Lori goes out with her new puppy Spike to investigate the noises Max made, Jarret grabs them and brings them into one of the cop cars and drives off to the EMAX lab. However, Max – due to having increased running speed – is able to catch up to them and make them crash their car in the EMAX parking lot. Jarret, Lori & Spike survive, but Max soon emerges from the wreckage and chases Lori all through the building, and Spike gets away from her along the way. Lori manages to appeal to Max’s sweeter side when they meet face to face in the laboratory, but Jarret emerges, shotgun in hand, telling her Max belonged to him. Max leaps onto Jarret to protect Lori and is shot, but Jarret is knocked through a lab window onto a cage a floor down. Spike, who liked to mess with electrical outlets, messes with a plug connected to a live electrical wire resting on the cage and causes the power to turn on, electrocuting Jarret to death. Max soon dies afterwards from his wound.

3 months later, Lori stops by Rudy’s house while out walking Spike, and he shows her Heidi’s new litter of puppies. However, one of the puppies is a Tibetan mastiff like Max, and it begins to growl… 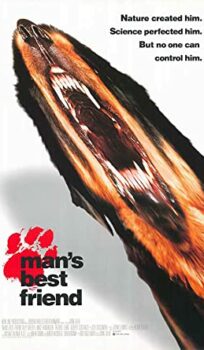