Long Ending:
Marnie (Tippi Hedren) is a thief. Her MO is to gain employment, learn how to access cash stored in the company safe, and then steal it and disappear. She has forged identification and references and also changes her hair color to escape detection. The movie opens on the police taking a report from her most recent boss whom she has robbed. The boss notes that while Marnie is very attractive, she is very prude (returning no male’s advances and never wearing revealing clothing).

We learn that Marnie gives most of the money she steals to her mother, Bernice (Louise Latham). Bernice is very cool towards Marnie (while showering affection on a neighbor’s daughter) and the pair have a strained relationship. Both women are hostile towards men. We also see that Marnie suffers from debilitating nightmares (that occur whenever she hears a knocking sound in her sleep) and has a phobia of the color red.

Marnie goes to work for wealthy aristocrat Mark Rutland (Sean Connery), a widower. He takes a personal interest in Marnie, particularly after she has a panic attack during a thunderstorm. The pair go on a couple of dates and they kiss, though Marnie is generally cool towards him. Eventually, Marnie robs the safe at Mark’s company and tries to get away. Mark tracks her down to a horse farm (she confided that she loved horses as they, unlike men, are “pure.” He used that and some other information she let slip to deduce where she’d be). He then says that he can either turn Marnie into the police or she can marry him and remain under his watch (he claims that, morally, he cannot let her free to rob someone else). Under duress, she agrees to marry him. Marnie continues to lie about her background to Mark, concealing the identity and existence of her mother.

The pair get married, causing Mark’s former sister-in-law Lil (Diane Baker) to become extremely jealous (Lil was hoping Mark would marry her instead). Mark whisks Marnie away to a honeymoon on a ship. On the first night, Mark attempts to sleep with his new bride, but Marnie runs screaming out of the room. Marnie explains that she neither wants Mark nor any other man to touch her. When Mark tries to get to the bottom of this (and Marnie’s other psychoses), she rudely rebuffs him. Mark promises not to make any further advances on her and the two begin bonding. However, Mark’s lust eventually overcomes him and he ends up raping Marnie. She then attempts suicide and after Mark saves her from death, they cut the honeymoon short and return to Mark’s home.

Once at home, Mark begins reading psychology books. Lil also eavesdrops on a secret conversation Marnie has with her mother and tells Mark that Marnie’s mother is still alive. He hires a private investigator to locate Marnie’s mother and look into her mother’s past. Although Mark tries to be nice to Marnie (buying her a horse, offering to pay off all the past employers she robbed), she continues to rebuff his advances. While riding her horse one day, Marnie sees the color red and has her horse gallop away. Her horse is injured and Marnie has no choice but to shoot it dead. Having fully snapped, she takes the gun to try and rob Mark’s personal safe. Though Mark catches her in the act and tells her she can take the money, Marnie can’t bring herself to rob him (suggesting that Mark’s efforts to rehabilitate her have been somewhat effective). Mark then forces Marnie to go with him to confront her mother.

When they arrive, Mark begins arguing with Bernice. This confrontation (plus the raging storm) causes Marnie to unearth a repressed memory from her childhood. Marnie remembers that her mother worked as a prostitute (and the male callers would knock three times – causing Marnie’s psychosis over knocking sounds). One client (Bruce Dern) hears the young Marnie crying in fear of a thunderstorm (another phobia) and begins kissing and caressing the prepubescent Marnie. Bernice walks in and begins attacking the client for touching Marnie. A struggle ensues and the client begins beating Bernice. Marnie hits the client with a fire poker and kills him (the blood caused her phobia of the color red). Bernice then lied and said she killed the client in self defense (and the police accept the story). The prostitution led to Marnie and Bernice’s dislike of men. Bernice then quit living as a prostitute, and Marnie repressed the memory of the incident. But Bernice, out of guilt,remained emotionally distant from Marnie

Marnie is relieved to have overcome her buried fears. Bernice (it is implied she is slightly mentally disabled) reveals she had Marnie at 15 with a schoolmate. The father ran off when Marnie was born, leading her to a life of prostitution. Bernice then says she loves Marnie more than anything, but simply didn’t know how to show it after the incident. The mother and daughter embrace. Having reconnected with her mother and overcome her trauma, Marnie and Mark leave Bernice’s house. Mark offers to let Marnie go to the police and turn herself in (essentially offers to let her out from his control), but she replies that she’d rather stay with him. 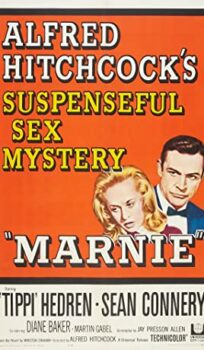