Pop superstar Kat Valdez (Jennifer Lopez) is set to marry her fiance, international sensation Bastian (Maluma), at a concert where they will perform their hit song “Marry Me” and exchange vows. Moments before the ceremony, Kat finds out that Bastian cheated on her with her assistant. On a whim, and to save face, Kat spots math teacher Charlie Gilbert (Owen Wilson) holding a sign that says “Marry Me” and impulsively agrees to marry him in front of everyone. Charlie reluctantly goes through with it and soon gets caught up in the media frenzy.

Kat and Charlie develop genuine feelings with each other after spending time together, and she bonds with his daughter Lou and his friend/coworker Parker. However, after Bastian invites Kat to perform “Marry Me” at his concert to boost her chances at a Grammy win, Charlie feels that he doesn’t fit in Kat’s world and breaks things off.

Kat later realizes that she really does love Charlie and leaves a taping of Jimmy Fallon to be with him. She flies to Peoria where Charlie and Lou are attending a math tournament, and she declares her love for him and asks to get married for real. Charlie agrees, and they get back together. 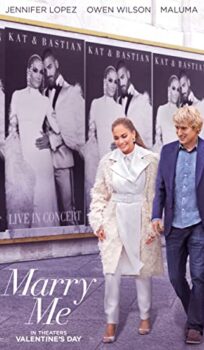