Milo’s (Seth Green) mother is taken by Martians in the middle of the night and Milo stowaways on the ship carrying her to Mars. Meeting up with Gribble (Dan Fogler), another human on Mars, Milo is informed by Gribble that The Supervisor (Mandy Sterling) is in charge of seeking out strict Earth moms and taking them in order to raise baby Martians.

It turns out the Supervisor grew tired of raising hatchlings without assistance from the males. So in order to fix it, when hatchlings are born, she has the males thrown away to live in the trash-infested part of Mars, while the females are raised by nanny robots. Every so often The Supervisor has to kidnap a strict Earth mother to program the robots with the Earth mother’s personality and memories, which is why Milo’s mother (Joan Cusack) was taken.

During the course of all this, Milo finds out that Gribble was another child whose mother was taken in the 80s and he stowaways on the ship to Mars like Milo did. However, Gribble was too late to save his mother from having her memory extracted, so he’s been on Mars for the past 20-something years. He decides to help Milo save his mother with the help of a rebel female Martian named Ki (Elisabeth Harnois).

Milo, Ki, and Gribble liberate captured adult male Martians and fight the The Supervisor. Milo makes it to his mother in time to save her from being extracted. While Milo and his mother are en route to the ship that will take them back to Earth, Milo’s air helmet shatters. Milo’s mother gives him her mask and starts to die in front of Milo. At the last minute, Gribble remembers he dropped an air helmet nearby from 20 years ago and digs it up just in time to give her air.

In the end, Milo and his mom make it back to Earth, Gribble stays on Mars with Ki, and the males are shown assisting with raising hatchlings. 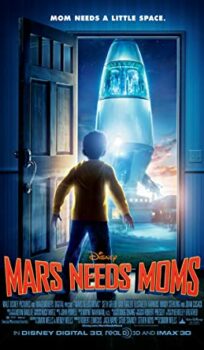