POOPER
Joseph Spell did not rape Eleanor Strubing, but they did have consensual sex, and she immediately regretted it. Eleanor jumped off the bridge attempting to commit suicide, and she scratched Joseph when he unsuccessfully tried to stop her. She was later found by a passing motorist and made up the rape allegation. Joseph never told anyone the truth because he was afraid if the truth was known, he’d be lynched. Joseph is found not guilty, and Marshall moves on to his next case.

LONG VERSION
In 1941, Thurgood Marshall (Chadwick Boseman) is a lawyer with the NAACP, trying cases of behalf of black people accused of crimes the NAACP believe are based solely on racial prejudice. His latest case takes him to Bridgeport, Connecticut, where he is defending Joseph Spell (Sterling K. Brown), a chauffeur accused of raping Eleanor Strubing (Kate Hudson), the wife of his employer. In order to try the case, Marshall first has to be admitted to the Connecticut bar, and local insurance lawyer Sam Friedman (Josh Gad) is assigned to do so by the head of his law firm. At the hearing, Judge Carl Foster (James Cromwell), who is a friend of the father of prosecutor Lorin Willis (Dan Stevens), allows Marshall to the bar, but he won’t allow him to speak at the trial, forcing the inexperienced Friedman to be the lead counsel.

Marshall and Friedman begin their investigation of the events. Joseph swears that he never had any sexual contact with Eleanor, and he tells them to talk to the patrolman who pulled him over the night of the alleged rape. The patrolman says that Joseph, who was driving the Strubing’s car at the time, was alone in the vehicle. Eleanor claims that the patrolman never saw her because she was tied up in the backseat. She also says that after he raped her, Joseph was driving to a bridge to throw her off of it into the lake when he was pulled over. Marshall questions that part of her story while looking at the bridge, because he wonders why Joseph would throw her over the side of the bridge without the rocks underneath. If he threw her over the other side, landing on those rocks would have killed her. At this time, Willis offers Joseph a plea bargain, and he seriously considers accepting it, but Marshall convinces him not to do so. But once the trial begins, a doctor testifies that Eleanor did have sexual intercourse that night, and that he found pieces of dark skin under her fingernails, as well as bruises throughout her body. Then Eleanor herself testifies that she scratched Joseph and he gave her the bruises during the rape and while he was tying her up. That night, Marshall and Friedman confront Joseph about this, and he admits to them he did have sex with Eleanor that night, but it wasn’t rape.

The next day, during her cross-examination, Marshall and Friedman are able to get Eleanor to contradict herself on the stand concerning the facts in evidence, and it appears that the jury is starting to question her testimony. The prosecution rests, and Joseph is called to the stand. He tells the court that it was Eleanor’s husband who actually gave her the bruises because he witnessed him beat her several times. On the night in question, Joseph went to the house to ask for an advance on his paycheck. Since Mr. Strubing was out of town on a business trip, he planned to ask Eleanor, but when he arrived, she was drunk and feeling lonely. She wanted to have sex with Joseph, and he said yes. They have sex twice that night, but then Eleanor begins to regret it. She has a panic attack because she thinks that her husband will find out or that she will become pregnant. She hears a dog barking and thinks someone is coming, so she tells Joseph they have to leave the house. Joseph drives her around trying to calm her down, but she hides in the backseat when the patrolman pulls them over. After the patrolman leaves, she orders Joseph to drive to the bridge, where she gets out and tries to jump off. He tries to stop her, but she scratches him and jumps off anyway. Thinking she is dead, Joseph panics and drives away. Because there were no rocks under that side of the bridge, she survived the fall. Eleanor then climbs out of the lake, stops a passing motorist, and tells him the made up story about the rape. During the cross-examination, Willis asks Joseph why he never told this to anyone. Joseph answers that he was afraid that if anyone knew that he had sex with a white woman, he’d be lynched. Willis demands that answer be stricken, but Judge Foster allows the statement to stand.

Before the closing arguments can be given, Marshall is ordered by the NAACP to immediately go to Mississippi to try another case. That night, Marshall writes the argument, and the next day, a confident Friedman gives it without Marshall in the courtroom. Afterwards, Willis offers Joseph another plea deal, with a much lighter sentence, but he turns it down. The next day, the jury finds Joseph not guilty, and Friedman calls Marshall in Mississippi to tell him the good news. The movie ends with title cards reading that Friedman went on to try many civil rights cases in Connecticut, and Marshall would become the leading legal strategist in the Civil Rights Movement and later the first black justice on the US Supreme Court. 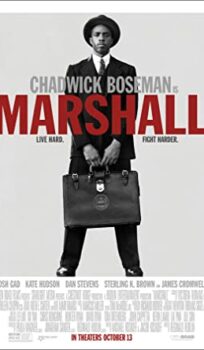