Just as they’re packing up the house to be evicted, Michael Banks discovers that Georgie used the missing bank shares to patch his kite. Michael and Jane rush to the bank to pay the loan while Mary Poppins (Emily Blunt), the children, Jack (Lin-Manuel Miranda) and the lamp lighters rush to Big Ben to keep the clock from striking midnight.

They get to the bank before midnight but the head banker (Colin Firth) declares that a piece of the shares is missing and therefore they are not valid. Mr. Dawes Junior (Dick Van Dyke) comes in, does a tap dance, and kicks out his nephew, declaring that the Banks children will keep their home as the tuppence Michael invested in the bank in the original movie has grown to sufficient money to pay off the loan.

The Banks family goes to a spring festival to celebrate and Michael declares that the door to his heart is open again, causing Mary, who had previously said she had to leave when a door opens, to fly off with her umbrella. 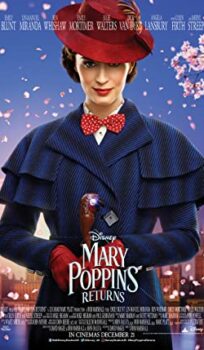