After both Jekyll and Hyde (John Malkovitch) have confessed their secret to Mary (Julia Roberts), she packs her bags and attempts to flee the house in the early morning hours. However, on her way out she stops by the lab, where she is attacked by Hyde. After threatening to slit her throat, Hyde inexplicably changes his mind and injects himself with the antidote, mixed with poison. Mary witnesses his horrible transformation back into Jekyll, and comforts Jekyll as he dies. Jekyll insists that Hyde’s suicidal action isn’t “revenge,” but instead “release.” Mary lovingly covers the doctor’s body with a blanket, leaves the lab, and disappears into the London mist. 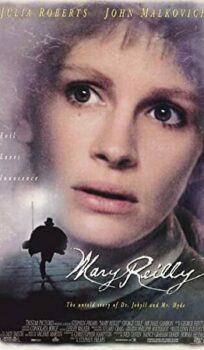