Though Rocky (Eric Stoltz) isn’t able to make his trip to Europe due to his friend Ben (Lawrence Monoson) moving away, he finds love with blind girl Diana (Laura Dern) during his time working at the blind camp and his mother Rusty (Cher) finally gets off of drugs. Some time after his Grade 12 year starts up, Rocky dies peacefully in his sleep at age 16 from his condition. As a saddened Rusty puts the thumbtacks back on the places in Europe that he wanted to go to, she says, “Now you can go anywhere you want, baby.”

The last scene shows Rusty, Gar (Sam Elliott), and biker friend Dozer (Dennis Burkley) paying tribute at Rocky’s grave, and Rusty remembers the poem that Rocky wrote about himself while she looks out at the setting sun. 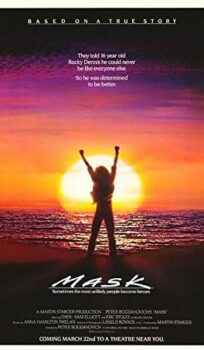