SHORT VERSION:
Larry Millard, the C.E.O. of a TV company that rivals Miles Lawrence’s TV company, is the real mastermind behind the kidnappings. His company and Miles’ were in a bidding war for the W.M.N. cable network, so he commissioned Bentley and his terrorist group to take over the school and hold the ten richest kids hostage – including Miles’ own daughter – for a ransom of $650 million, the same amount of money Miles was planning to use in his bid for the network. This would force Miles to focus on freeing his child and paying the ransom to do so, which would enable Millard to acquire the W.M.N. before the court-ordered deadline that day. Also, Miles’ C.F.O. Deroy is in on the kidnapping plot.

Thanks to Ozzie’s cunning, intelligence, and computer skills, the rich kids are found and freed and the terrorist group is defeated, and Ozzie eventually blows the whistle on both Deroy and Millard to the authorities. He and his friend K-Dog also rescue his stepsister Melissa from Bentley himself – who was personally holding her hostage in order to get to Ozzie – while having an A.T.V. chase with him through the city’s storm drains connected beneath the school (which the terrorists had planned to escape through), though Bentley escapes with the briefcase full of bearer bonds that the ransom came in. However, when Bentley reaches an exit to the outside, he falls right into the dirty water of a sewage reclamation plant and the briefcase sinks to the bottom, and we hear police sirens approaching his location to apprehend him.

LONG VERSION:
Ozzie (Vincent Kartheiser) manages to rescue Principal Maloney (Brenda Fricker), Ms. Saunders (Teryl Rothery), and all ten of the rich kids and hide them in a secret room in the school that he found, but Bentley (Patrick Stewart) is personally holding his stepsister Melissa (Katie Stuart) hostage in order to get to him. He then goes down below the school, where a bunch of miners led by Ollie (Callum Keith Rennie) is creating an escape for Bentley and the other criminals into the city’s storm drains once they get the $650 million ransom (meaning that the escape via helicopter that the cops believe Bentley is doing is just a diversion). Ozzie steals some dynamite from them, fashions a time bomb with it, and places it beneath the school’s indoor pool, then sets it to go off at 3:00 a.m. Shortly afterwards, Miles’ (Bradley Whitford) chief financial officer Deroy (Michael MacRae) arrives with the ransom – originally to be used for Miles’ TV company’s bid for the W.M.N. cable network – in untraceable bearer bonds as Bentley ordered, but after Miles tells Bentley over the phone that the money has arrived, Bentley tells him that he wants Deroy to deliver the bonds to him personally since he was the one who fired him from Miles’ company and had promised he would see him again one day. Meanwhile, Ozzie’s friend K-Dog (John Abrahams) – who has snuck into the sewer system in an attempt to get to Ozzie – discovers that the criminals are keeping A.T.V.s in the drain pipes that they will be using to make their escape with, but he flees just as Ollie and the miners bust through the wall to reach them.

Ozzie goes to the blocked-out skylight above the office Bentley is stationed in and peers through a hole in it and sees that Melissa is unharmed, but when she sees him and makes eye contact with him for too long, one of the terrorists notices this and whispers an order to another goon over his walkie-talkie to check out the roof, and Ozzie is soon surrounded. During this, Deroy comes into the office with the bonds in a briefcase, but the police microphone he is wearing is quickly discovered and destroyed, and just as another of Bentley’s terrorists readies to shoot him with his handgun, Ozzie crashes through the skylight. He knocks the gun out of the terrorist’s hand and soon grabs it and throws it to Deroy so he can hold up Bentley with it, but moments later, Deroy points the gun at Ozzie, revealing himself as Bentley’s confederate. Ozzie is subsequently tied up, and Deroy phones the real boss of the kidnapping scheme to let them know that he and the others are finished here. He, Bentley, and the other villains then depart so they can make ready their escape, and Bentley forces Melissa to come along as an “insurance policy”.

Just as the bad guys are leaving, Ozzie’s bomb detonates, draining the pool and flooding the underground escape route. All the antagonists get washed away, as does Deroy with the briefcase, but Bentley and Melissa avoid it. Ozzie manages to cut his bindings with a shard of the skylight’s glass just as the police assault the school, and he goes down to the escape route to find Melissa. Deroy is then shown making his way towards the A.T.V.s, and after he puts the bonds in one of them and tries to start it up, Maloney appears – having decided to leave the hiding place to assist Ozzie after feeling the explosion – and knocks him unconscious. She is then forced to hide when Bentley shows up with Melissa, and Bentley enters the A.T.V. Deroy was about to use after seeing the bonds in it. He starts up the vehicle and the headlights reveal Maloney standing nearby, so he chases after her down one of the storm drains and eventually knocks her silly with a sideswipe. Ozzie pursues Bentley in an A.T.V. of his own, and after stopping to check on Maloney and deducing that she will be okay, he gets jumped from behind by K-Dog, thinking that he is one of the bad guys. Once Ozzie gets him to chill out, they both hop into the A.T.V. and resume the chase. After an extended pursuit, Ozzie and K-Dog reclaim Melissa just as they reach a fork in the drain, and they go down one path while Bentley goes down the other and escapes with the money. The youngsters get up to the street, where a passing taxi driver stops to check on them, and Ozzie asks to use his radio to call the police.

Meanwhile, Miles, the cops, and Ozzie’s and Melissa’s parents Jake (Matt Craven) and Helen (Annabelle Gurwitch) find Saunders and the kids, and Saunders tells Jake and Helen that Melissa is not with them because the terrorists took her away before Ozzie got them to safety and she doesn’t know where either of them are. The moment after Ozzie has reclaimed Melissa, we see Jake, Helen, Miles, and the cops at the escape route’s entryway and meeting the awakened Deroy as he comes out of it, and he makes up a story saying that he fell and hit his head. Just then, Ozzie gets a hold of his parents, and he first assures them of his and Melissa’s safety before asking about Maloney. Jake informs him that she is missing, but then mentions that Deroy is here with him. Ozzie tells him that Deroy is Bentley’s partner, which is then seconded by an arriving Maloney. Jake asks Ozzie if he can prove it, so Ozzie tells him to get a hold of Deroy’s phone because he used it to call the real boss of the kidnapping plot. The police get the phone, then Jake dials the number and finds out that Larry Millard (Jim Byrnes), the C.E.O. of a corporation that rivals Miles’ company, is behind it (his company was competing with Miles’ company for the W.M.N. network, so he arranged the kidnapping scheme with Bentley and the terrorists so Miles would have to focus on saving his child, plus the $650 million Miles’ company was going to use in the bidding war would be given to the terrorists, all of which would allow him to buy the W.M.N. before the court-ordered deadline that day). The cops take Deroy to jail, and a police helicopter soon picks up Ozzie, K-Dog, and Melissa. We are left to assume that Millard will also be arrested and imprisoned.

Bentley spots an exit approaching and believes that he has escaped to freedom, but the exit just leads right into the dirty water of a sewage reclamation plant. After he falls into it, the briefcase starts to sink to the bottom, and he desperately attempts to reclaim it as police sirens are heard drawing near. 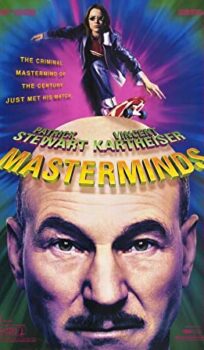