POOPER:
Though Skeletor succeeds in absorbing the powers of Castle Grayskull and transforms into a god-like being, he loses them after he battles He-Man in the throne room and He-Man cuts his staff in two with his sword. De-powered but not defeated, Skeletor then tries to attack him with his own sword, but He-Man causes him to fall down into the pit underneath the walkways of the room to his supposed death.

Gwildor sends Julie and Kevin back to Earth with his Cosmic Key, but he sends them back to the morning of the day when Julie’s parents died in the plane crash. When Julie realizes this, she prevents her parents from taking the flight, saving them.

After the credits, Skeletor emerges alive from the liquid at the bottom of the pit and warns, “I will be back!”

LONG VERSION:
Evil-Lyn (Meg Foster) manages to get Gwildor’s (Billy Barty) Cosmic Key away from the heroes by shapeshifting into Julie’s (Courteney Cox) deceased mother and tricking her into handing it over. Evil-Lyn then uses the Key to send a signal to Skeletor (Frank Langella), who comes to Earth with an army via his own Cosmic Key. Evil-Lyn reports to him that she has obtained Gwildor’s Key, but He-Man (Dolph Lundgren) has eluded her and her crew. Skeletor sends out his soldiers to find him.

A few of them find He-Man and company, and He-Man leads his friends into a building. After telling the others to make for the roof, he shoots a soldier off of his hoverboard and takes it. He finds Evil-Lyn and her gang and gets the Cosmic Key back from her, then flies back to his friends, taking out a few more of Skeletor’s soldiers as he goes. A surviving soldier gets a command from Skeletor telling him to lead He-Man to him, and then Skeletor finds Julie, Kevin (Robert Duncan McNeill), Man-At-Arms (Jon Cypher), and Teela (Chelsea Field) and has his remaining soldiers hold them hostage.

Moments later, He-Man arrives. As Julie tries to yell to He-Man that he has fallen into a trap, she takes some of a lightning bolt that Skeletor shoots at him, which injures and poisons her. Skeletor destroys Gwildor’s Key, and he stops He-Man as he is beating down his troops, telling him that he will let his friends live if he surrenders his sword and returns to Eternia with him as his slave. He-Man complies, and he is restrained and taken back to Castle Grayskull.

As the group tends to Julie, Man-At-Arms tells Kevin that only the Sorceress of Grayskull (Christina Pickles) can save Julie from the poison. Kevin asks Gwildor if there was another way for them to get to Eternia, but Gwildor denies it, saying that even if he could fix his Key, the tones for Eternia have been erased from its memory, and they would never be able to find them again no matter how long they searched for them. Kevin asks if the tones were the melody the Key played every time he pressed the red button on it, and when Gwildor acknowledges this, Kevin shows that he has memorized the tones by correctly whistling them. Using some spare parts provided by Man-At-Arms and Teela and a keyboard that Kevin gets to play the tones on, Gwildor repairs the Key and succeeds in opening the portal to Eternia. Detective Lubic (James Tolkan) – who got personally involved in a lot of the past events – then shows up to try to arrest them, but he gets taken along to Eternia as well.

As all of this is going on, Skeletor and his army enter the throne room of Castle Grayskull with He-Man, and Skeletor puts He-Man’s sword in the stand next to the throne – which plays a key role in claiming the power of Castle Grayskull – and then has him chained up and whipped. Soon after, Eternia’s moon aligns with the Great Eye of the Galaxy, which opens and infuses Skeletor with the power, transforming him into a golden-armored god-like being.

He-Man’s friends arrive in the throne room moments later, and Skeletor orders his troops to open fire on them. Angered that Skeletor has gone back on his word, He-Man tricks him into using his magic blasts to break his chains. After evading some more of his blasts and taking out his troops (during which Evil-Lyn and the rest of Skeletor’s henchmen retreat), He-Man reclaims his sword and call upon the powers of Grayskull, infusing him with enough power to fight an even fight with Skeletor.

After a short battle, He-Man cuts Skeletor’s staff in two with his sword, causing him to lose his newfound powers. De-powered but not defeated, Skeletor attacks He-Man with his own sword, but He-Man causes him to fall down into the pit underneath the walkways of the room to his supposed death. The Sorceress is freed and returns to normal, and she heals Julie.

Julie and Kevin eventually prepare to go back to Earth, but Lubic decides to stay in Eternia, having already quickly settled into a better existence there. The Sorceress gives Julie and Kevin a glowing blue orb so Eternia will always be near them, and then the two bid their Eternian friends a fond farewell. Gwildor offers to use the Cosmic Key to send them to any point in Earth’s past or future that they wish to go to, but they initially refuse. However, just as they are stepping through the portal to go back to Earth, Julie turns at the last second and tries to ask Gwildor to take her to a certain time, but she is seemingly unable to complete her request.

Julie awakes in what seems to be the next morning, but she soon discovers that she has been sent back to the morning of the day when her parents died in the plane crash, and this time, she prevents them from taking the flight. She runs outside and soon meets up with Kevin, who acknowledges that everything they experienced was not a dream. They look into the blue orb and see He-Man in front of Castle Grayskull, sword held high, yelling, “I have the power!”

After the credits, Skeletor emerges alive from the liquid at the bottom of the pit and warns, “I will be back!” 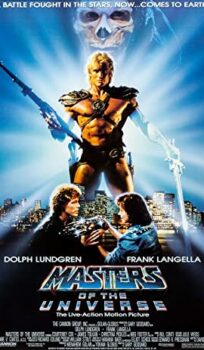