Dr. Andrews (Norman Burton) goes to the mausoleum and gets the crown of thorns off of the door, then makes a beeline for Susan (Bobbie Bresee) and Oliver’s (Marjoe Gortner) home to get the crown on Susan’s head to expel the demon from her. Meanwhile, Susan fully transforms into the demon and kills Oliver.

Dr. Andrews makes it to the house and finds Susan up in the attic, along with most of the people she killed while under the demon’s influence. Dr. Andrews sets the crown of thorns on her head, and it sends the demon out of her and back to its sarcophagus in the mausoleum. Dr. Andrews and Susan then go to the mausoleum, since Susan was the only one who could place the crown in the sarcophagus with the demon in order to seal it away, due to the demon’s curse affecting the female line of her family. She puts the crown in, and the lid of the sarcophagus closes, ending the whole ordeal.

Outside, Dr. Andrews puts Susan in his car, and then walks over to a mysterious hooded man sitting on a tombstone. He says to him “You’ve known the secret and lived with it, like your father before you, and his father before him. Remember: No one goes into the mausoleum. NO ONE.” He and Susan then drive off, and the hooded figure is revealed to be Susan’s gardener Ben (Maurice Sherbanee), who was seemingly killed by her earlier in the film. He was the one present in silhouette on the day that Susan loosed the demon from its sarcophagus, and apparently is the guardian of the mausoleum (the details of his role are largely left unexplained). Andrews’ words to him indicate that he had apparently learned about who he was through reading Susan’s family’s diary. 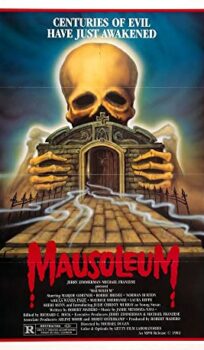