During her tenure as the Mayor of Bridgeville, Mary (Lea Thompson) comes across some evidence that shows that Greg (Peter Patrikios) and Arnie (Peter Pryor) – whom she already fired from the city council – had been embezzling from the town’s coffers during the administration of the late Mayor Bloodworth (Thomas J. McCarthy), and Bloodworth and his daughter Britney (Melissa Tepperman) joined in on it as well. Also, as her responsibilities as mayor grow, her output as a wife and mother suffers, and she eventually learns from Jimmy (Buck Schirner) – her boss at the restaurant she makes cupcakes at – that the quality of her cupcakes has sunk to an inferior level. One day, at a town shareholders meeting, Greg tries to undermine Mary’s abilities as mayor and also throws in a few disparaging remarks about her character, prompting her police officer husband, Donald (Judd Nelson), to punch him in the face. When a reporter questions Mary about the incident a day or two later, she confirms that Donald hit Greg and that it doesn’t bother her in the least, and her comments get aired on the news. After seeing and recording her comments, Greg and Arnie come up with a plan to get Mary removed from office.

The next day, Greg confronts Mary outside the cemetery just after she has finished visiting her grandmother’s grave. He tells her that he is going to be pressing charges against Donald and will see to it that he gets arrested, prosecuted, and kicked off the force, and then he will file a civil suit against the town, which he knows he will win thanks to the statement she made on TV. Sensing that he is seeking to blackmail her, Mary asks him what he wants. He tells her to call another town meeting, appoint a vice-mayor at this meeting, and then quit, after which the vice-mayor will become mayor until the next election. He wants her to appoint the weak Milo Horn (David Mulholland), a multi-time mayoral candidate, to the post (which will presumably enable him and Arnie to manipulate Milo into hiring them back as city councilmen so they – along with Britney – can resume their embezzlement scheme). When she gets home, Mary tells Donald all about what Greg has ordered her to do. That night, she tearfully watches a performance Donald recorded of their daughter Anita (Madelyn Deutch) playing a song with her band that she dedicated to her mother after she got elected. A few days later, Mary stops by Greg’s car dealership to speak to him before heading off to the aforementioned town meeting, and she tells him that she will go along with his despicable plan. She then asks him if he is at all bothered by the fact that he, Arnie, and Bloodworth had been stealing from the town, and he replies that it doesn’t bother him, basically because he feels that the people of Bridgeville are nothing but a bunch of idiots. Mary then departs.

At the meeting, Mary announces to the assembly (which includes her family) that, thanks to the various cutbacks she implemented, the town has paid back all of its outstanding bills and a new garbage truck has been ordered, plus there is enough money left to make a down payment on a new police cruiser. She then brings up how someone advised her to appoint a vice-mayor and that she will do so now, after which she calls Milo up to the front. She tells everyone that she doesn’t think that Milo would do anything wrong on his own and that he is a good man, but then she tells him to sit back down. Greg stands up and issues a warning to her, but this doesn’t deter her from announcing that the new vice-mayor will be her friend, co-worker, and advisor Albert (Dorian Harewood). After Albert is sworn in, Greg demands for the policemen present to arrest Donald, but they stay right where they are. Mary then proceeds to play a video from her camcorder on a nearby TV for all to see, and the video reveals that she had said camcorder concealed in her purse when she met Greg earlier on, and it recorded his face and every single word he said to her. Greg is thus arrested and taken away, and Mary is applauded for uncovering the embezzlers.

Mary ends up stepping down as mayor anyway and lets Albert succeed her, and she returns to baking cupcakes full-time, and they go back to the level of deliciousness that they once had. She also gets a proper headstone for her grandmother since she was poor when she died, and Mary didn’t have enough money at the time to get her one. While about to sit down to dinner with her family one evening, Mary gets a call from newscaster Greta van Susteren (herself) asking for a quote from her regarding someone putting her name in the running for the governorship of Delaware and her being a frontrunner in early national polls for a bid to become U.S. President. Her family then tries to convince her to take the next step politically. Meanwhile, the sitting U.S. President asks one of his advisors if they have heard back from Mary yet regarding an important position he offered her in his administration, and he tells him that she did call back, but she politely refused the offer, saying that she wanted to remain where she was. The President asks what is keeping her in Bridgeville that is so important, and the advisor replies that she is a cupcake maker. The President remarks that he loves cupcakes, as do his daughters, and his advisor replies that everyone does. 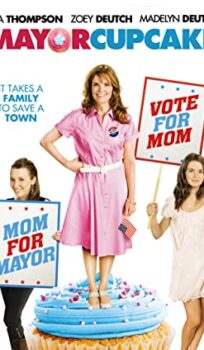