Lieutenant Lon McHugh (John Wayne), aka “McQ,” discovers that his deceased partner Boyle was corrupt, and had been stealing heroin from the Seattle Police Department’s evidence impound. Captain Kosterman (Eddie Albert) has been having Lon tailed, because he believes McQ was also in on the drug theft.

McQ figures out that Boyle’s widow Lois (Diana Muldaur) was an accomplice in the plot. She knew her husband had hidden the drugs in McQ’s car, which is why she’d constantly been flirting with McQ and suggesting they run away together in his car.

Lois gets hold of the drugs, and tries to drive out of town with them, but McQ catches up to her, and finds that she has the heroin in one of her suitcases. McQ sees that Lois is being followed, and he drives her car to the beach, where he gets into a shootout with one of the corrupt cops who’d been helping Boyle steal drugs. After killing the corrupt cop, McQ discovers that it’s Detective Franklin Toms (Clu Gulager).

Drug kingpin Santiago (Al Lettieri) and his men drive up moments later, and chase McQ and Lois down the beach. McQ takes out a hidden machine gun he’d obtained earlier, shoots the whole gang, and lets the suitcase full of heroin drift out into the ocean.

Lois is arrested. Captain Kosterman apologizes to McQ, and gives him back his police badge. McQ invites Kosterman to grab a drink at a nearby bar. 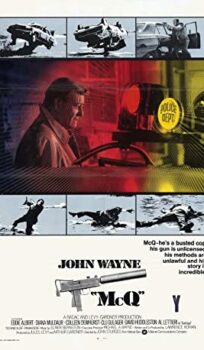