Malcolm Anderson (Kurt Russell) is a newspaper reporter for the Miami Journal, and he is feeling burned out. He and his girlfriend Christine (Mariel Hemingway) are ready to quit their respective jobs (she’s a schoolteacher) and move to Colorado.

On the day Malcolm is going to give his notice, his editor assigns him the story of a dead woman found on a beach. Later that day, a man calls Malcolm claiming to be her killer. He is skeptical of the claim, but when the caller tells him about evidence that only the killer would know about, Malcolm realizes that this is indeed the killer, and he says that he will call again. Malcolm gets the newspaper’s editor, legal team, and the Miami police involved, and waits for the next call. The killer calls again, and there are more dead bodies. Suddenly, Malcolm goes from covering the story to becoming part of it. While all of this is going on, a hurricane is heading towards South Florida.

The killer is Alan Delour, a psychopath who is recreating a series of murders that he committed several years earlier but didn’t get the notoriety he craved from the reporter covering the crimes. He hoped that this time, the reporter would give him the spotlight he wants, but becomes angry at Malcolm because he is the one who is receiving all of the headlines and not himself. The police and Malcolm figure out that there were 5 deaths the first time Delour killed, but there have only been 4 deaths this time. Delour then kidnaps Christine from her school, and takes her to the Everglades. Delour demands that Malcolm come to the Everglades alone and exchange himself for Christine. When the cops show up, Delour appears to kill himself and Christine is rescued.

That night, while Malcolm and Christine mend their wounds and prepare for theoncoming storm, Delour shows up at their house. The body in the swamp they thought was Delour was actually another man that he found that physically resembled him, and that person was victim #5. Malcolm and Delour fight in the house, and Delour loses his gun in the struggle. Malcolm picks up the gun and kills Delour. At the end of the movie, Malcolm fulfills his promise to Christine and resigns from the newspaper. 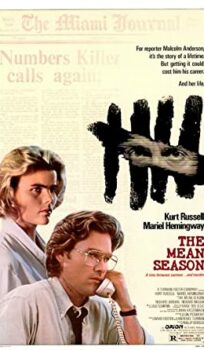