One day, while Phil (Paul Walker) is out on a date with Jesse (A.J. Langer) somewhere in Yellowstone Park and Stew (Steve Van Wormer) is working on the park’s prairie dog infestation problem at his and Phil’s private camp, the real Mel (Ana Gasteyer) and Mo (Megan Cavanagh) finally make their arrival at the park. After reporting to Captain Pine (John Ashton), they and Pine drive over to the Deedles’ camp to confront them over assuming the ladies’ identities. After seeing that Stew is the only one there, they demand for him to tell them where Phil is, so he confesses that Phil is with Jesse. They thus take Stew out in a helicopter with them to locate the duo, and after finding them, Jesse is enlightened to who Phil really is and gets upset with him for lying to her. As Phil and Stew are flying back to the ranger station with Pine and Jesse, the brothers try to explain to Pine that they have come to love this park and they really do want to help get rid of the prairie dogs, but he refuses to listen, telling them that they lied about who they were and wasted valuable time while the number of prairie dogs got worse by the day, plus Phil now hurt Jesse, and there is no place in Yellowstone for a couple of surf bums.

Just then, Slater’s (Dennis Hopper) goons Crabbe (Richard Lineback) and Nemo (Robert Englund) fire some rifle bullets at the helicopter with the intention of taking out the Deedles so they won’t interfere in Slater’s plans any further, but all this does is cause Pine to fall out of the open doorway and down into a raging river below. Jesse makes the chopper land on the riverbank, and after she tries and fails to throw Pine a rope to help him get back to shore, the Deedles take a pair of First Aid boards and use them to go surfing after Pine while Jesse resumes following in the chopper. The Deedles catch up to Pine, and they each grab hold of one of his arms, but before they can all plummet down a waterfall, Phil and Stew grab onto the helicopter’s landing skids with their other hands as it comes down above them, and the three men keep their grips on each other until they get back on solid ground. Out of gratitude for saving his life, Pine informs the Deedles that they will be sworn in as park rangers at 9:00 a.m. tomorrow morning before Old Faithful’s one billionth birthday celebration.

The Deedles throw a luau at their campsite that night for everyone in the park, and Phil and Jesse wind up going to a private hot spring and get intimate with each other. However, Slater sneaks into the party with the intention of killing the Deedles himself, and he finds Stew lying unconscious in the brothers’ tent, having knocked himself out by accident moments ago. Just as Slater is about to cut his throat with a knife, he casts his eyes on Stew’s computer and sees that it is displaying his plan for ending the prairie dog infestation as well as a thermal imaging map of the prairie dogs’ tunnel, and the plan explains how Phil and Stew are going to be using underground explosives (cherry bombs) at their graduation ceremony to seal off the tunnel. Slater decides to forget about killing the Deedles, instead printing off a copy of both the plan and the map before sneaking back out of the park. At their graduation in front of Old Faithful the next morning, Phil and Stew explain their plan for the tunnel to Pine, Jesse, and the other rangers, after which they set off the cherry bombs. However, Slater, Crabbe, and Nemo have already planted dynamite in the tunnel, all the way up to Old Faithful, and they detonate that at the exact same moment, which causes Old Faithful to stop erupting. The Deedles get blamed for “killing” the geyser and are subsequently banished from Yellowstone, and they and their stuff get dumped off the side of the road just outside the park limits.

After thinking about what has just happened, Stew tells Phil that someone must have framed them because cherry bombs aren’t powerful enough to put a geyser out of commission. Shortly afterward, he takes another look at his thermal imaging map of the prairie dog tunnel, and he points out to Phil that that tunnel leads directly to Old Faithful. He then tells Phil that, if they follow the tunnel in the opposite direction, it will likely lead them to the source of the rodents and thus whoever destroyed Old Faithful, and then hopefully they can figure out a way to get the geyser gushing again. Their investigation ends up taking them right to Slater’s meadow, and upon entering his façade trailer home, they find his old ranger jacket as well as pictures showing his desire to kill them and Pine. When they try to leave, they are seized by Crabbe and Nemo, who – along with Slater – saw them on the trailer home’s security cameras in their cave underneath the trailer, and they immediately bring them to Slater.

After the Deedles inform Slater that they know now that he is the mastermind behind the prairie dog problem, he explains that he had been using the animals to dig the tunnel by injecting liquid kibble into the soil. However, after the Deedles began to screw with his plans and cause the rodents not to dig as fast as he wanted, he snuck into their tent and stole their map, then used dynamite to blast the rest of the way to the tunnel’s final destination: The geothermal vent of Old Faithful. He shows the guys that Old Faithful’s water is still erupting into a nearby steel tank, thanks to a pipeline that he put through the tunnel connecting the tank to the vent. He explains that when the geyser erupts at noon, he will divert the water from the tank into the shaft of an extinct geyser located just above them, which he will christen as “New Faithful”. He will then create “Slaterstone Park” around it and rake in a fortune from tourism, and this will serve as his ultimate revenge on Yellowstone Park for banning him, plus doing this process at noon will also result in Pine getting publicly humiliated. Before leaving for elsewhere, Slater orders Crabbe and Nemo to kill the Deedles and then put on their heat resistant suits for the next stage of the plan.

The Deedles get the better of the henchmen and run away from them, and they soon find themselves in an area with a bunch of caged prairie dogs and barrels of the liquid kibble. When Crabbe and Nemo catch up to them, the Deedles spray them with the kibble, then unleash all of the rodents on them and send them running. They then put on the heat-resistant suits and approach Slater as he is opening the safety valves to take some pressure off the tank, and – thinking that they are Crabbe and Nemo – he tells them to help him with his task. However, the Deedles close the valves instead, then reveal themselves to him. A strong blast of steam then emits from a nearby pipe and knocks all three of them to the ground, but Slater quickly gets back up and picks up a broken wooden support pole, then approaches the brothers so he can stake them both with it. Thankfully, P.D. – a prairie dog Phil made into a pet – chews loose a block and tackle pulley system above Slater, sending it falling onto his head and knocking him out. As the cave starts to collapse, the Deedles have P.D. show them the way out, and they tie up and drag Slater along with them so they can have him arrested later. P.D. winds up taking them right to the tank, meaning that the pipeline to Old Faithful is their best chance of escape. Stew thus reverses the water’s flow back to the geyser, but not before he explains to a reluctant Phil that their protective suits will keep them all from being burned by the boiling water. After Phil puts P.D. into his suit to keep him safe, the brothers force Slater into the tank with them, and then they ride the water right back to Yellowstone. They fly out of Old Faithful’s spout moments after the noon hour, just as Pine is about to get in trouble with his superiors, and the Deedles get cheered by the park’s staff and visitors for saving the geyser and are also reinstated as park rangers. Slater, Crabbe, and Nemo are later placed under arrest.

In a fortunate turn of events, so much hot water explodes out of Old Faithful that it causes a reaction that results in a tremendous amount of it flowing back through the pipe to Slater’s meadow, flooding the entire area and transforming it into a small lake with waves big enough to surf on. The Deedles take control of this new lake with help from their father Elton (Eric Braeden), and they turn it into the now-successful “Deedlestone Park”. Elton visits their park while they are hanging out with Jesse, Pine, and the Yellowstone nurse Jo-Claire (Hattie Winston) (whom Pine shares a mutual attraction with), and he lets them know that he is very proud of both of them for what they’ve accomplished here. Jesse shares a kiss with Phil, and then they, Stew, Elton, and the others dash into the water to ride some waves. 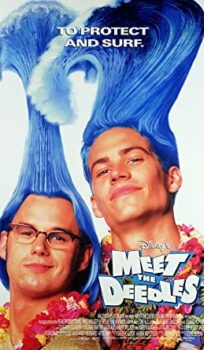