Submitted by Christine and ND Woods

SHORT VERSION
When Melancholia passes by earth, it comes so close that it’s gravity pull winds up dragging the earth into it, with an obliterating outcome for all life on our planet.

LONG VERSION
The movie opens with the wedding of Justine (Kristen Dunst) and Michael (Alexander Skarsgard). The wedding is being held at Justine’s sister Claire’s (Charlotte Gainsbourg) Estate home. Claire’s husband John (Kiefer Sutherland) paid for the entire wedding. It ends up being complete mess. Justine quits her job, has sex with some other guy and ends the marriage. All this happens at the reception.

We start to see Justine has some mental issues, but it looks likes it runs in her family. At the reception, Justine sees a star in the sky that looks different to her. She asks John about it. He is really into astronomy. He is surprised she noticed the star, and says it’s from a certain constellation.

As the movie moves forward, we find out the star is really a planet the has been hidden behind the sun for, lets just say a VERY long time. This new planet is named Melancholia. It will be passing by earth and should just be a “Fly-By”.

Justine is becoming completely undone, as the planet gets closer to us. She goes to stay with Claire, John and their son for a while. Claire wants to help her sister, plus she is very worried that Melancholia is going to smash into Earth and not just do a fly-by.

When Justine arrives at Claire’s house, she can’t even walk by herself. She doesn’t have the strength or the will power. All she wants to do is sleep. Claire tries to help Justine take a bath, but she can’t even step into the tub. Slowly Justine starts to come back to life. As she does this, we see that Claire is VERY worried about the approach of Melancholia. She goes to the store and buys some kind of pills. If the planet is going to crash into Earth, she wants to put her family out of any misery. John see’s the pills and asks in a rude way if she got enough to kill all of them. She gets upset and leaves the room. John has been telling Claire she is over reacting about the new planet. She should be very excited about it. He has a high powered telescope he using every day to watch Melancholia.

The night of the fly-by comes, and we see this huge, beautiful blue planet. It comes very close and messes with our atmosphere for a short time. Then the planet starts to move away from earth.

Claire is very relieved. Justine is still not quite herself. She knows this is not over with. The next day, John looks through his telescope and seems very very upset about something. Claire asks him what’s going on because as far she knows, Melancholia is moving away from us. Claire falls asleep outside while John is still looking through the telescope.

When Claire wakes up, John is gone. She walks over to the telescope and uses a device her son made to tell how far away Melancholia is from us. She realizes the planet is coming back around to Earth. She runs all around the house looking for John. She finally finds him in the horse’s stable. He has taken his own life using all the pills Claire bought earlier. Knowing that the Earth is going to be destroyed she tries to hold it together for her son. She makes him and Justine some breakfast. The realization hits her, and she grabs her son and tries to drive into town. Justine asks her what’s she doing. Claire tells her to come with them, and Justine says no. None of the cars will start. Claire uses a golf cart and attempts to drive into town. The battery dies, and she has to walk back to the house holding her son. He has no shoes on and a big hail storm comes crashing down on her. She makes it back to the house, and the hail storm is over. She puts her son in bed and goes to talk to Justine. That’s when Justine tells her that she knows things. She’s always known things no one else would every know. Two things she knows for sure is we are completely alone in this universe, and we are all going to die very soon.

Claire tries to make special plans for the end of the world. Justine thinks her idea is stupid and says no. Justine is standing outside looking at Melancholia when Claire’s son walks up to her. He tells her he is scared. Justine tells him not to be because she knows how to make a hidden cave that will keep them safe. The two of them find pieces of wood, and Justine makes a tee-pee type fort. All three go inside and hold hands. Justine tells the son to close his eyes as does Claire. Justine watches as Melancholia crashes right into us. 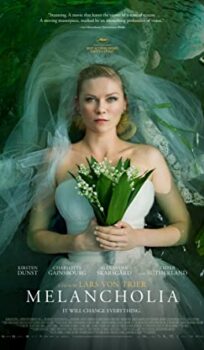