Memoirs of a Geisha

Sayuri (Ziyi Zhang) loves The Chairman (Ken Watanabe) from afar for years, even when war strikes and she’s sent away to the countryside to work in a silk factory. She makes a Geisha comeback when the disfigured Nobu (Koji Yakusho), needing to restart his war-ravaged business, asks for her help in clinching a deal with the barbarian Americans. She obliges, and Nobu reveals that he’s wanted her for years and begs her to let him be her sponsor. Thinking all hope of love is gone, Sayuri agrees to give herself to Nobu. Surprise, The Chairman comes along instead to save the day and reveals that he’s the one who sponsored her Geisha-ship and got her out of servitude all those years before. They kiss and wander off together in some beautiful garden. For some reason, a melancholy quote about the loveless life of a Geisha voices over the final shot. 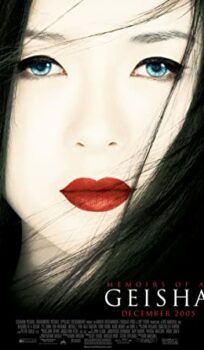