POOPER:
The Memphis Belle, along with the surviving members of the squadron, bomb the factory on the second try.  Despite being heavily damaged, the Memphis Belle returns to England and successfully completes its 25th and final mission.

LONG VERSION:
In May of 1943, the crew of the B-17 bomber Memphis Belle, based in England, is preparing for its 25th mission.  Under the rules of the US Army Air Force, once a crew completes 25 missions, their tour of duty ends.  Since the ten man crew of the Memphis Belle, led by Captain Dennis Dearborn (Matthew Modine), would be the first to complete 25 missions, the Army throws a party in their honor.  While the entire squadron is enjoying the party, they are hesitant to celebrate too much because they believe that might jinx the mission.  The next day, the squadron learns that the target of their next bombing mission will be an airplane factory in Bremen, Germany.  Everyone suddenly gets nervous because the last mission to Bremen resulted in huge losses for the squadron.  After bad weather over the target delays the mission several hours, the Memphis Belle and the rest of the squadron take off and join up with some P-51s to escort them to the target.

After engaging several German fighters, the P-51s are forced to return to their base due to low fuel, leaving the bombers on their own.  The fighters begin engaging the bombers, which results in the lead plane being destroyed and another to be damaged and forced to turn back.  With the Memphis Belle now in command, the squadron reaches the target area, but the bombing run has to be aborted due to a smokescreen blocking the view.  Instead of turning back to the base, Dennis makes the incredible decision to circle around the begin the run again, which puts the bombers in more danger.  With more and more bombers getting shot down, the smokescreen clears and the squadron is able to drop their bombs and destroy the factory.

Now flying back to England, the Memphis Belle gets shot up by German fighters, resulting in heavy damage to the aircraft.  As a result of the fighting, radio man Danny (Eric Stoltz) gets seriously injured.  Faced with the decision to fly back to England and Danny possibly not survive, or toss him out with a parachute and hope the Germans capture him and treat his wounds, the crew decides to keep him on board.  With the base in site, Dennis lowers the landing gear, but one of the wheels is stuck in the up position.  The crew frantically lowers the wheel manually while the plane descends, knowing that they won’t get a second chance at a landing.  Just seconds after getting the wheel down and locked, the plane lands roughly.  With the rest of the squadron looking on, the crew of the Memphis Belle exit the plane and help load Danny onto a waiting ambulance.  As he is exiting, Dennis sees a bottle of champagne that Danny had smuggled on board.  Dennis takes the bottle, exits the plane, and pops open the bottle to celebrate the completion of their final mission with his crew. 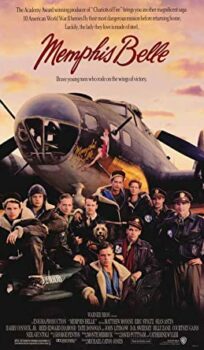