The “Galaxy” is a jewel, and it is in Orion’s bell, not Orion’s belt, Orion being the marmalade cat.

K (Tommy Lee Jones) and J (Will Smith) defeat the alien bug and retrieve the “Galaxy”, thus saving Planet Earth from destruction by the Arquillians. K asks J to neuralize him because he’s burned out, tells him he’s been training a replacement, not a partner, and bequeaths him his neuralizer. J does so, the tabloids report “Man Recovers From 35 Year Coma” and there’s a photo of K with his lost love. 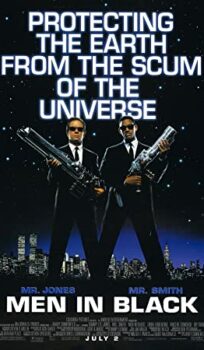